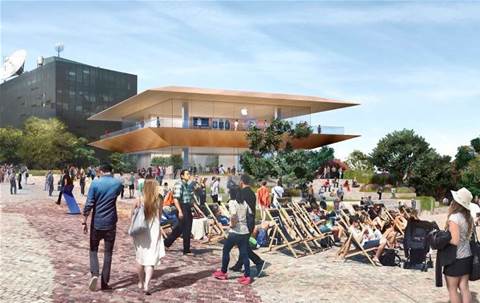 The concept for the Apple store in Federation Square.

Yarra Building in Federation Square to be demolished.

Apple has ended its lengthy search for a central Melbourne location to house a flagship store, signing a deal with the state government to locate one of its new-look centres in the iconic Federation Square.

The centre will replace the existing Yarra Building and span almost 500 square meters of new public space. The Koorie Heritage Trust, currently housed in the Yarra Building, will be moved to the Alfred Deakin building in the square.

The Apple facility will create "extra open space in front of the big screen to watch the biggest and best events" and "make it easier for people to move between the Yarra River and Birrarung Marr", the Victorian government said.

Apple's concept for the store "respects and expands" on the original vision for the site, Federation Square architect Donald Bates said, "with more public space, extensive landscaping and better access to the river allowing more people to enjoy this renowned civic, cultural and commercial hub".

The state government is hoping the Apple centre will be a "major drawcard" for visitors and locals. It is expecting an extra 2 million people to come to Federation Square every year after the Apple store opens.

Construction on the centre will start in early 2019 and the store is expected to open in 2020.

It will become Apple's second global flagship store outside the US, the fifth worldwide, and the first in the southern hemisphere.

“We’re thrilled to move forward in the planning process for our new home in Melbourne’s Federation Square and will be honoured to call the world-class galleries and museums of Melbourne our neighbours," Apple retail senior vice president Angela Ahrendts said in a statement.

Apple opened the first of its new global flagship stores in San Francisco mid last year. The concept for the facilities is to provide a town square-type community centre where people can go to hang out or work, surrounded by music, walkways, and public talks.

The company has long searched for a Melbourne site that could accommodate its very specific requirements for a flagship store. It has spent the last few years in negotiation with the state government for a megastore in Federation Square.

The cost of the building has previously been reported at $50 million.

Apple has three existing Melbourne stores located in the Chadstone, Doncaster and Southland shopping centres - outside the central city area, unlike Sydney where it has two flagship stores on George St and at Bondi Junction.

However, the federal government's decision has been criticised for the significant changes to the Federation Square public space that will result from Apple's new facility.

Others took to other social media platforms to publicly criticise the plan.

"And despite this being a public centre, the changes to the planning scheme have already been approved without any public process.

"The Yarra building and Koori Heritage Trust fitout cost a fortune. Is moving them at great expense across the square really a good use of resources?"

“It is extraordinary that any government would even remotely entertain a bid to demolish part of Melbourne’s most successful urban public space and most iconic piece of contemporary architecture in order to facilitate a glorified retail premises," he told Architecture & Design.

“Melbournians will not stand by and watch this happen."