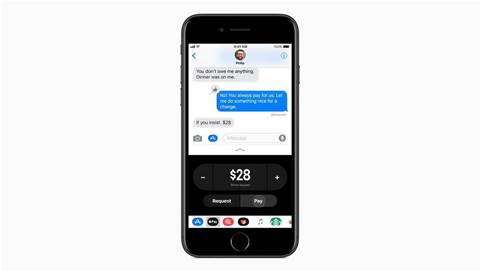 Apple has made the Pay Cash person-to-person payments system it unveiled earlier this year available to beta testers in the United States.

Built into the Messages app, Apple Pay Cash was originally set to debut with the company's iOS 11 mobile operating system update in September.

It is now shipping with the public iOS 11.2 beta software Apple unleashed today. It works in a similar way to the PayPal-owned Venmo payments service, allowing users to transfer money with their smartphones.

For now, Apple Pay Cash is only available to beta testers in the United States, and will only work across iOS devices.

The minimum amount users can send and receive with debit cards is US$1, and the maximum is US$3000. Within a seven-day period, the most money that can be sent and received per Apple Pay account is US$10,000.

After users have verified their identity, the person-to-person payments system allows for a maximum balance of US$20,000.

The company has not said when Apple Pay Cash will become available outside the United States.

Last month, the Commonwealth Bank, Westpac, and National Australia Bank announced a joint venture to develop a payments app in response to the threat posed by Apple Pay in Australia.

Called Beem, the app will be compatible across devices and banks in Australia and offer instant payments.