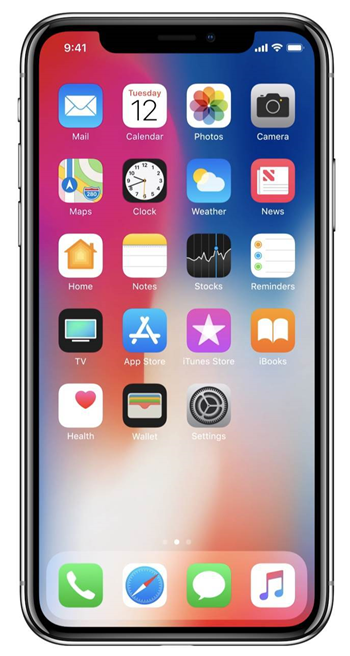 The 5.8-inch iPhone X uses the latin numeral for 10, like Apple's OS X desktop operating system did until it was renamed macOS.

It sits above the 5.5-inch dual camera iPhone 8 Plus which replaces last year's iPhone 7 Plus, which was also launched today along with a 4.7-inch iPhone 8 with a single camera.

Pre-orders for the iPhone X start on October 27 in Australia, with delivery from November 3. 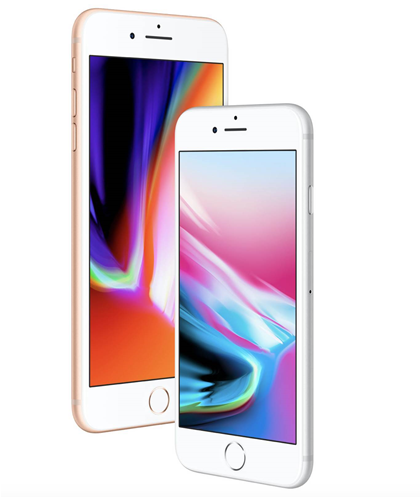 iPhone 8 and iPhone 8 Plus

The iPhone X uses a markedly different design to the iPhone 8, thanks to a curved-edge screen and a notch at the top of the display for the TrueDepth camera system.

The screen uses OLED technology without backlighting, and has 2436 x 1125 pixel resolution. This gives it a density of 458 pixels per inch, the highest in any iPhone.

Apple has added support for high dynamic range (HDR10) and Dolby Vision and TrueTone wide-gamut colour in the OLED screen, which also features a one to million contrast ratio, along with 3D Touch haptic feedback.

As expected, Apple has removed the home button with the built-in Touch ID fingerprint authentication sensor on the iPhone X, replacing it with the Face ID visage recognition technology.

Face ID uses an infrared sensor, point mapping, and illumination of the user's face. It works in the dark as well as daylight.

Thanks to neural engine hardware on the new Apple A11 Bionic chipset, the authentication method learns a user's facial features, and can recognise them even when glasses and hats are worn, Apple claims.

The company says Face ID is more secure than Touch ID, with only a one in a million chance of the facial recognition being fooled by another user, compared to 1:50000 for the fingerprint sensor.

Apple also said Face ID can't be tricked with photographs, as it measures the depth of facial features and requires user interaction such as as swiping the screen to unlock the iPhone X.

It is unable to tell the difference between identical twins, however - Apple's vice president of software engineering Craig Federighi suggested users add a second authentication step if they have similar looking siblings who might unlock their iPhone Xs.

Face ID can be used with Apple Pay to authenticate transactions, like Touch ID.

The three new iPhones all support the LTE-A standard for cellular broadband.

Under the hood of the new iPhones sits Apple's in-house designed A11 Bionic chipset, which is a 2 x 4 processor core design.

For the first time, Apple has designed the graphical processing unit as well, providing a 30 percent speed increase for image and video performances, as well as machine learning capabilities.

Overall, the A11 Bionic is claimed to be between a quarter and 70 percent faster than the A10 predecessor, depending on which cores are used.

The A11 Bionic neural engine that powers Face ID features an Apple-designed dual core processor that the company claims is capable of 600 billion operations per second.

As launched last year, Apple has made augmented reality (AR) with 3D graphics a prominent feature for the new iPhones, and the hardware has been optimised to provide the necessary performance for games and other applications.

All three iPhones have newly designed rear cameras, with improved sensors but keeping the same 12 megapixel resolution as before.

The iPhone 8 Plus has an f/1.8 aperture wide-angle camera with optical image stabilisation (OIS), and with the f/2.8 telephoto imager, it can make use of portrait mode with shallow depth of focus, alongside a feature that allows users to pick different studio lighting in real-time for portraits.

Apple added a faster, f/2.4 telephoto lens to the iPhone X, and the longer lens also gets OIS, and a quad-LED flash that can do slow synch.

On the iPhone X, the 7 megapixel front "selfie" camera can now do portrait mode with digitally created bokeh or blurred backgrounds as well.

Apple is catching up with competitors and is now offering wireless charging using the open standard Qi devices for its new iPhones.

To work with wireless charging, the iPhone 8, 8 Plus and X have glass bodies instead of aluminum, which are reinforced with laser-welded steel mesh for greater durability.

The company said it will work with the Qi consortium to release next year a charging pad that allows users to place more than one device on it to charge their batteries.

The Watch Series 3 sports full 4G LTE and UMTS cellular radio for independent operation with no iPhone companion device required, and a faster dual-core processor, as well as a barometric altimeter sensor.

Australia will be among the first countries to get the Watch Series 3 , with the LTE enabled model starting at $559 and local availability from September 15.

Apple's entertainment hardware offering, the Apple TV, will go on sale in Australia on September 22.

It brings 4K resolution along with high dynamic range through the HDR10 standard as well as Dolby Vision. The company said HD titles will be automatically upgraded to 4K in customers' Apple TV libraries.