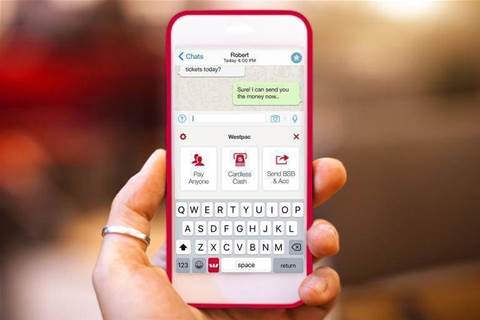 Apple has forced Westpac to pull its Keyboard payments function from its Westpac Live banking application for iPhones.

The Keyboard function was introduced in March this year, and allowed Westpac iPhone users to make payments from within certain chat apps - like SMS, WhatsApp and Twitter - using the keyboard.

A six-digit cardless cash code is sent to a contact to enable a cash withdrawal from an ATM.

Westpac touted the feature as an Australian first. It is available in Westpac Live on iOS and soon Android and Windows Phone, using technology developed by fintech start-up PayKey.

But the bank has confirmed - as first reported by the Australian Financial Review - that come July and its next software update, the Keyboard feature will be removed from Westpac's iOS app.

“The free keyboard feature that enabled customers to transfer money through social media applications will not be included in our next software update in July," a Westpac spokesperson said.

"The Keyboard was originally approved but we were later notified that it was not suitable for the App Store. This is disappointing for us and the thousands of customers who are currently using it.

"We apologies to our customers for any inconvenience caused and thank them for their continued support.”

Apple has been contacted for comment on its reasoning for removing the function.

It is understood that Apple only approves keyboard-based payments functionality within its proprietary iMessage application, and does not allow keyboard extensions to support payments in other applications over security concerns.

Westpac is one of three major banks recently embroiled in a bitter fight with Apple over the NFC payments function in the technology giant's devices.

Westpac banded together with NAB, the Commonwealth Bank and Bendigo and Adelaide Bank to lobby the ACCC to let them collectively pressure Apple to open up the NFC in its iPhones and boycott its Apple Pay platform.

The banks lost the battle in late March. ANZ Bank is currently the only of the big four banks to offer its customers Apple Pay.

The service is also available at Macquarie and ING Bank, as well as to American Express customers and Cuscal's 31 financial institution partners.