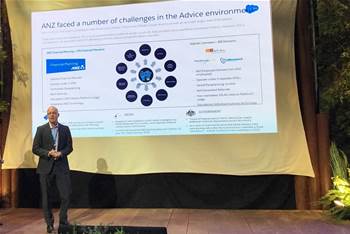 Creates single view of adviser and practice as regulators circle.

ANZ is using a new “snapshot” of both salaried and self-employed financial advisers to monitor their track record and more quickly identify instances where their advice leads to complaints or the need to pay out compensation.

The bank’s business solutions and initiatives manager Matthew Peterson told iTnews that the Adviser Hub project began about about two years ago.

“We got to a point in time where the world was changing and I think the advice businesses in a lot of the banks hadn’t gone through the journey,” Peterson said on the sidelines of Salesforce’s Dreamforce 18 conference.

“A lot of the other operational areas of banks had moved with technology quite quickly.

“The processes at the bank [around providing financial advice] were really robust but we just didn’t have anything joining the dots.

“We had to do something to link it all together just to be able to wrap our arms around the business.”

Financial advice has been a reform topic for the Australian Securities and Investments Commission (ASIC) for a few years, and this year’s Royal Commission has brought renewed focus to the space.

In particular, authorities have taken a keen interest in delays between financial institutions recognising issues and remediating them.

“The regulator was really interested in what was going on with our advisers across the market,” Peterson told the Dreamforce 18 conference.

ANZ has about 270 financial planners that are salaried employees of the bank. A further 650 advisers are self-employed and use their own standalone technology systems.

Prior to 2018, the bank had no “holistic picture across its advice business” - and tracking down information internally could be a lengthy process.

“Like a lot of banks, we had some fantastic processes but what we didn’t have was everything stored in one spot,” Peterson said.

“We’d essentially pick up the phone and speak to someone about a complaint in one department, or about an adviser on-boarding in another department, but we didn’t have that linked together.”

The lack of a central data resource was particularly problematic when the bank would run governance forum to drill through audit data on its advisers, and senior management would have questions about what they were seeing.

“Historically how it would have worked is we would have sat in a governance forum and someone would have seen a 50 page slide deck and a static graph and said ‘can someone go away and tell me which state in Australia has the highest fail rate’ [for a question asked during an audit],” Peterson said.

“The next month, someone would come back and answer that question”, and from there the process would repeat as more questions were asked and data was sought.

In October 2017, the bank brought all of the relevant data about financial advisers together into Adviser Hub, a new Salesforce instance that is functionally separate from other instances in other parts of ANZ.

Adviser Hub acts as "a centralised repository of practice and adviser data, allowing us to strengthen our knowledge and insights of ANZ's advice channels", a slide deck accompanying Peterson's presentation stated.

“We didn’t change any of our processes, and we kept all our teams the same, but what we did is we essentially linked all of the data together,” Peterson said.

“A couple of years ago if you were to ring a senior leader and ask how many advisers we had in the business, they’d pick up the phone and call someone in one department and someone else would email HR to find out that information.

“On our homepage now, we have things like the numbers of advisers per practice and per licensee. You can see the number of complaints, how much money we’re paying out, the number of incidents, and our onboarding trends at a really high level for our senior leaders to have access to that information.”

Every financial adviser now has their own page where “key information” about them is stored.

“Anyone [in the ANZ backoffice] can go in and have a look at their last audit score, did they pass or fail, have they got any complaints across their business at the moment and have we paid out those complaints or any incidents,” Peterson said.

“What we now have is essentially a snapshot of that adviser that is essentially all in one spot that anyone has access to. That information then rolls up to a practice level as well so we don’t just want to know about a particular individual adviser but [also] ... all the collective advisers in that practice as well.” 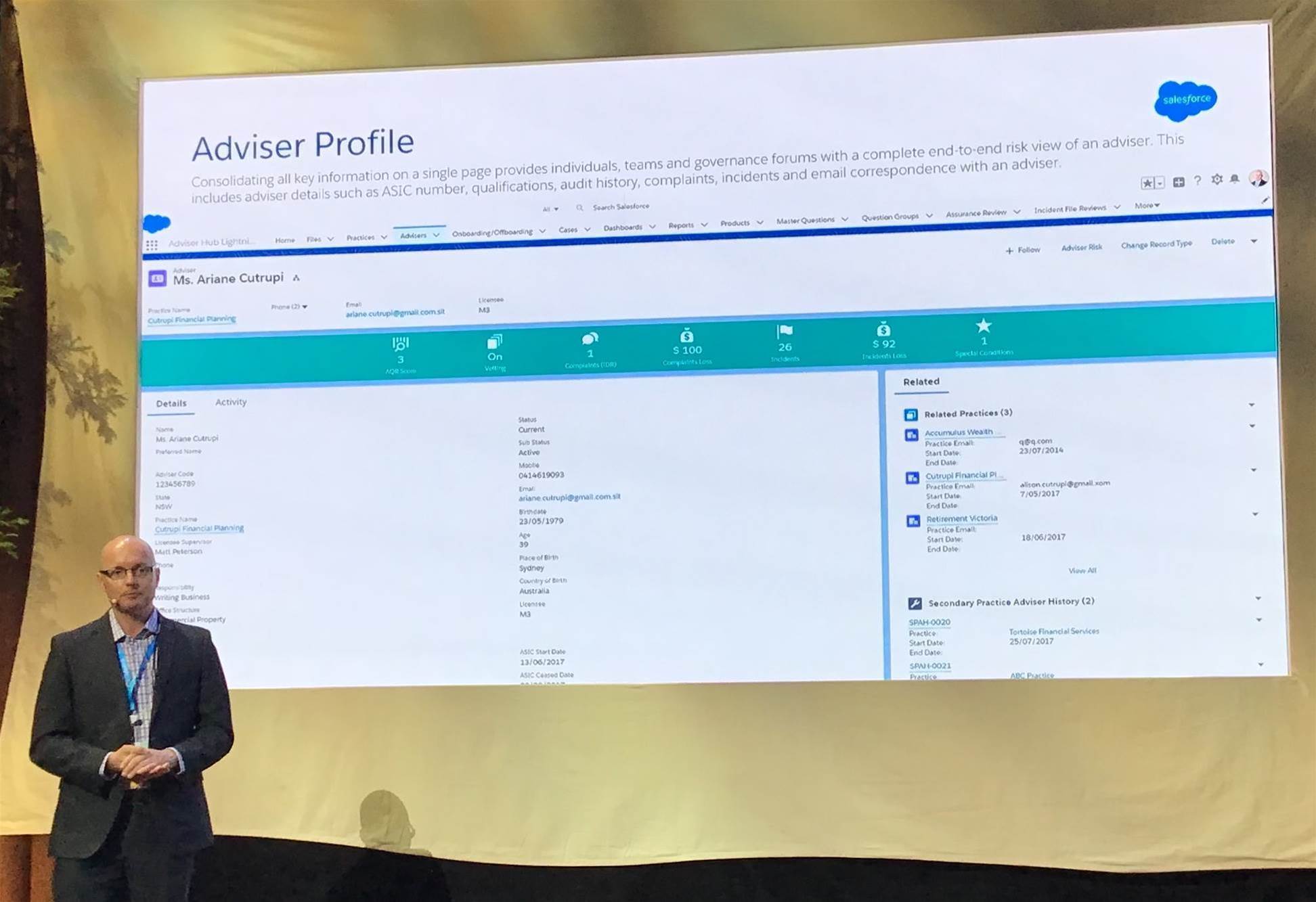 Peterson shows off an adviser profile within the new hub.

In addition to providing data at a licensee, state, practice and individual adviser level, the Adviser Hub is "supported by workflow, reporting and analysis tools", ANZ said.

Backing the data - particularly that which is collected during audit processes - are analytics functions that help ANZ drill down into individual issues as well as trends.

Whereas previously the bank’s 200-odd backoffice staff would use Excel or Access for the purpose, this kind of functionality is “now essentially at the fingertips for everyone in the backoffice” through the Salesforce platform.

The 200 backoffice staff include people in a range of operational and supervisory roles whose job it is "to report, govern and monitor the advice business".

“When we review a particular adviser we’ll essentially check and go through a number of questions on a client file to make sure that they’re giving the right advice to a particular customer,” Peterson said.

“The ratings go from one to five, one being a great score and five being a fail. So now we can see the whole of the country in relation to how they’re going on passes or fails and we can drill down on that information.”

ANZ has four years’ of data in relation to the pass and failure rates of advisers when answering each of the 30 questions asked in an audit.

Now, when audit results are being discussed in internal governance forums, graphics used in the slide decks point directly to the underpinning data held in Salesforce.

“Rather than things taking two to three months to get to the root cause, we’re having that happen within two or three minutes in a governance forum and having actions come out of our meetings.

“Having high level information that a complaint cost you $10,000 is great, but going back to have a look in the platform with the senior leaders and actually see what was the root cause, how long did we take to find it, what did we do to remediate and how fast are we doing those things - essentially those conversations take place much quicker.”

Peterson also said that use of the single view of the adviser had “escalated really quickly” within ANZ.

“It’s starting to change the culture ... [to] something a lot of people thought wasn’t possible in the risk and compliance area of the business,” he said.