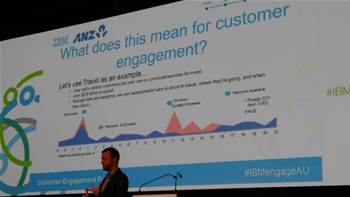 ANZ Bank is using systems to comb customer transactions for intelligence on how they spend money, so as to start relevant sales and service “conversations”.

The bank is almost two years into a major project known as 'strategic next best conversation' (SNBC), involving a significant investment in “time, effort and money”, according to ANZ customer understanding and insight strategy and design lead Sam Kline.

Speaking at an IBM customer engagement forum, Kline revealed an early use case for SNBC, where the bank identifies customers with travel plans by monitoring for airline ticket purchases.

After detecting this “significant event”, the bank then “observes” the account looking for other travel-related transactions.

The information can be used to piece together details of the trip, such as the destination, and the level to which a customer’s spend is over and above what they would normally outlay at home.

It’s expected this intelligence will become the basis for a range of communications to the customer – from pointing out the location of ANZ ATMs at the travel destination to offers to waive fees for foreign purchases, or advice on how to pay off any debt incurred on the trip.

Kline said SNBC was “about investing in people, data, analytics and technology so that we can listen and act on key moments in our customers’ lives”.

“When you think about it, people using their credit cards and savings accounts [produce] such rich information,” he said.

“From that information, we can really accurately determine so many things about customers – what they do in their lives, their life stages, how their spend pattern is changing, how do previous patterns that aren’t there all of a sudden [emerge, and] what does that mean in terms of changes in the customers’ lives.”

Kline said until recently, ANZ “hadn’t really understood the value of the data” in its systems.

“We’re going from having monthly extracts from core systems into getting them in daily and in some cases intra-day and then near real-time as well,” he said.

This previously low level of access into systems was also symptomatic of what Kline referred to as a “decade-ish” of under-investment in the bank’s information management capabilities.

Kline looked outside the finance sector for inspiration to inform the strategy underpinning SNBC.

“We’re leveraging some of the more sophisticated analytical capabilities that are coming online now, and some of the newer technologies,” he said.

“We didn’t just want to follow the path of our competitors. We really wanted to look at organisations that are good in this space and really bring that back into how we build out our strategies.”

The bank spent a significant amount of time and money getting the systems underpinning SNBC right, he said.

“We’ve had to spend a lot of time, effort and money to really uplift the kit and capability under [SNBC] to make sure it’s [capable of] everything we want it to do,” Kline said.

“We had to do that to get to a foundational level, and now we’re starting to drive more and more volume [through the systems].”

ANZ is using IBM Detect (formerly known as Unica) to ‘listen’ to customer transactions, and Teradata technology to ‘interpret’ that intelligence. Other technological components were not discussed.

Kline likened the overall architecture to “an ecosystem of decision engines” that were capable of improving the decisions they made over time.

“SNBC is a continuous learning system,” he said. “Every response, every action is fed back into the system to improve decision-making through data and analytics.”

Kline acknowledged the “trusted” position of the bank as a holder of “information that is really dear to customers – their financial information”.

“It’s service type conversations, it’s advice, [and] it’s education, so when it comes time to talk about a sale or a buy, it’s almost top of mind … because we’ve worked with you along the way to help you think about and understand your finances.”

How much or how little ANZ should do with the intelligence it gathered on customers’ travel plans – for example – appears to be an open question.

While the intelligence could be an opportunity to “help the customer, reiterate features on their products or just have that dialogue of how do we help them prepare for when they do actually travel”, Kline noted, it could also stop the bank sending irrelevant or “annoying” communications while the customer is away.

“What should we not be talking to them about when they’re travelling? What really annoys you when you’re travelling and you hear from ANZ?” he said.

“And when you’re back, should we be thinking about how we help customers pay off that travel and then save for the next [trip]?”

The first indication of impending travel is usually an airline ticket purchase, recognisable by the transaction description or merchant category code.

“There’s a period of time between booking the ticket and when they actually travel. Let’s observe and see what they’re doing in that time as well.

“If you start to dig into this, then you can do so much richer analysis and start to predict and understand where customers are travelling to,” Kline said.

“There’s 11-ish weeks generally between when they book and when they travel, and that’s 11 weeks where - if we know they’re going to Singapore or Dubai - what should we be talking to them about?

“’Hey we’ve got ANZ ATMs in Singapore, make sure you use those so you don’t incur some of the foreign currency fees’. All of those sorts of things presents a really good opportunity for us to help the customer.”

A customer could also be messaged about getting lounge access at an airport using their ANZ card, or receive notification that foreign exchange fees will be waived for the first ten transactions once they touch down at the destination – effectively “spend stimulation offers on [their] card”.

In leads we trust

One of SNBC’s first outings was at ANZ’s branch and network summit in Sydney earlier this year, which is attended by the general and district managers of the bank’s network of “753-odd” branches.

A subset of around 100 attendees used customer intelligence from SNBC to make live outbound calls to test the system’s efficacy.

Kline noted the managers would not normally make outbound calls.

“Sure, they’d interact with customers in the branch network but they didn’t outbound call them,” he said.

The test was a “phenomenal experience”, according to Kline.

“Customers were really surprised that ANZ’s ringing me, and it just opened up so many conversations,” he said.

SNBC also challenged what the branch network thought they knew about their customers.

“What they learned and talked about as a group which was really powerful was that we’ve got to learn to trust the leads [than SNBC generates],” Kline said.

“We’ve got to harness the power of the data.”