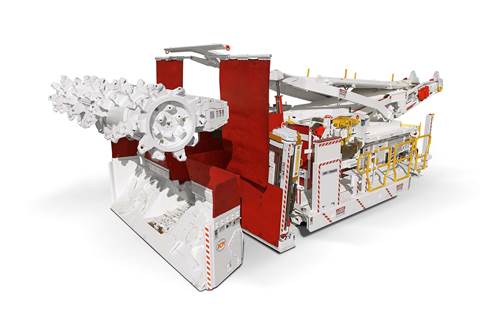 One of the Joy Global machines designed for Grosvenor.

Next stage in automation of Grosvenor coal mine.

Anglo American will move the remote operations centre for its Grosvenor mine in Queensland from below to above ground this month, in an effort to remove some of its miners from the dangers of working close to the coal seam and heavy mining machinery underground.

The technologically-advanced mine operation, which shipped its first coal earlier this year, uses three 12ED25 machines made by Joy Global and automation systems by Joy and ABB.

Remote operations are being used by Anglo American, Rio Tinto, BHP Billiton and others to increase worker safety and production output while driving down costs.

Anglo American is phasing in the use of automation and remote control at its new Grosvenor mine.

To begin, the remote operations centre (ROC) for the longwall of coal is located about 140 metres from the cutting face - providing some separation for workers but keeping them in reasonable proximity to the longwall during set-up and early use.

“It’s part of the stepping stone [to remove workers from the face] – step 140m away from the face, then step fully away,” head of mining excellence underground for Anglo American coal, Dieter Haage, told iTnews on the sidelines of the Future of Mining 2015 conference.

“As the role of the operator changes from one of an operator to a system manager, having that proximity [to the face at first] allows the transition to happen in a controlled way.

“I think if we’d removed them totally as the first step to the surface, we wouldn’t necessarily have success. So it’s baby steps but firm steps.”

The ROC on the surface is largely the same as the one that has to date been located underground, barring some “slightly different layouts and features”.

“What you get on the ROC underground, you’ll be capable of operating at the surface with some refinements,” Haage said.

“Connectivity’s not the issue - you’ve got a large fibre connection [to the mining machines] so you can have the ROC anywhere really.”

Haage used a presentation at the conference to talk up the data required both to pursue an advanced automation project in the first place and then to maximise the value from it.

He noted the step change in safety and output over existing Anglo sites that Grosvenor's business plan called for.

“Without data, designing something new that’s going to outperform what you’ve already got is impossible,” he said.

One of those performance baselines is the company’s adjacent operations at Moranbah North, which is mining the same coal seam.

Haage said the company is using its experiences at Grosvenor and Moranbah North to optimise them both.

“In our design process for the Grosvenor longwall we had to have data,” he said.

“Conventionally, underground coal mining has been done on opinions. In the absence of data, opinions often determine the design.

“[With Grosvenor’s systems] we’ve lifted the veil and shone a torch into the murky darkness of what actually happens underground, [producing information] that’s not opinion-based.

“If you’ve got a sensing capability that covers the entire system you can sense that you’d never pick up in conventional studies.”

Haage said the company is investing in data scientists to make sense of the information the mine is generating – such as from cameras attached to the equipment.

“There’s some significant resources being put into analytics,” he said.

“We’ve got PhDs working with the data, turning it into something we can make decisions on.

“It takes a bit of time to figure it out, but we have some serious data crunchers and the information we’ve been getting out is astonishing.”

Aside from aiding design and other types of decisions, the data is also used to recognise and triage any issues encountered by the machines underground.

“There’s an instantaneous response that says if something goes out of kilter, immediately there’ll be a response that’s automatically generated out of the analysis system,” Haage said.

“We’ve set up rules and immediately people who are accountable to fix whatever it is that’s going wrong can respond.

“For example if we found the machine was doing something that was going to compromise geotechnical [integrity] and end up with a [subsurface] cavity, we’ve automated the process of knowing that and then kicking out a response.”