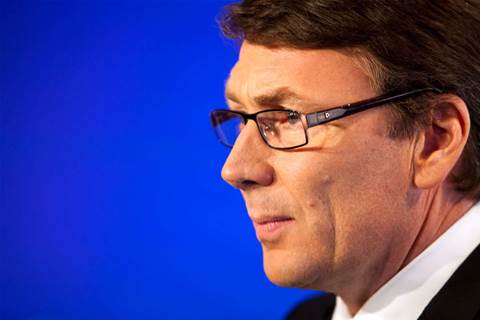 Telstra executives gave investors an in-depth view of the company's current performance and future strategy at the telco's investor day yesterday, which today we have neatly summarised into ten key take-aways.

Chief executive David Thodey ran a tight ship, keeping the five-hour plus event on time in an effort to cram in as much detail as possible about the company's future plans and strategies to combat declining revenues and a share price Thodey saw as undervaluing the company.

While talk of job cuts, NBN timelines and its Project New transformation dominated, there were a lot of other interesting bits to come out of the day. Below is iTnews' attempt to summarise them.

Ballantyne on the frontline

The company revealed that some of his executives have been manning the phones and retail stores to gain an understanding into how the company interacts with customers.

"I've been working in the stores, been trained on our store systems," Ballantyne said.

"I've been working in our contact centres. I've been trained on all of the telephone systems; all of our current operating systems.

"I've been receiving calls; I've been selling to customers.

"So I know what it's like to feel like as a frontline agent and I understand some of the complexity and frustrations that we have as we try to deliver on the service promise that I think everyone in this room expects of Telstra."

Welcome to the jungle

Ballantyne had the job of arresting revenue declines in the consumer business.

"Last year, in fiscal year 2010, the brutal facts of the matter were we lost share in five of the six categories that we currently operate in. In particular - in mobility, as well as in fixed broadband," he said.

Ballantyne was formerly director of sales and service at UK carrier T-Mobile, "the number four player in that marketplace."

"When you wake up in the jungle every day, you wake up knowing you're not the lion and you better wake up running each and every day to ensure that you can drive profitable growth in an innovative way," he said.

He contrasted that to Telstra's recent performance: "It was as if our competitors - the number two and three players - weren't waking up every day running, like I've been running in the UK over the last seven years.

"My role in leading the consumer business is to ensure that that doesn't happen again."

Telstra is using your services

Group managing director of corporate strategy Robert Nason said yesterday that Telstra has conducted "probably... the most detailed competitor analysis that we have ever undertaken.

"We are matching our process with the rest of the market and we are doing that very intensively domestically, but we are not leaving it there."

Investor day provided a first glimpse of whether or not the strategy was paying off.

"In our first week of offering 24 hour, seven day sales and service, over 115,000 customers contacted us after hours to utilise that facility," Nason said.

"Following our announcement on weekend technicians, over 7500 customers have utilised this service and had technicians visiting them on the weekend to save them having time off work and waiting for the Telstra tech to arrive."

Customers of Telstra's software-as-a-service, T-Suite, were more likely to hold onto or churn to Telstra broadband services than customers not using T-Suite, it emerged yesterday.

Over half of T-Suite customers also bought "multiple applications", she said.

The carrier signed on 70 customers last year and an "28 customers connected this quarter", McKenzie said.

"Our initial look at it is that our guidance will not change, but we have still got quite a bit of work to do to look at really what that means in the industry," Telstra chief David Thodey said.

"We think there is some more discussion we need to have with the regulator about what structure has got to be created within the industry going forward."

Telstra made mention on a number of occasions of sales figures for products that it said were driving growth in dwindling fixed-line revenues.

Much attention was focused on its T-Hub internet phone and T-Box digital set-top box.

Chief financial officer John Stanhope provided a brief look at sales of the devices in the first two months of the fiscal year 2010/11.

"Success in these products and bundles is important as they will help slow the decline in PSTN access lines, help stimulate PSTN usage and differentiate our fixed broadband offering.

"I am pleased to say that our sales channels have been managing sales volumes akin to Christmas levels of trading."

Telstra claimed to have enjoyed a 55 percent increase in active wireless broadband connections on its Next G network year-on-year.

But that scale of growth would not last in the short term.

"We do expect growth to slow slightly over financial year 2011 with a changing mix in the consumer market towards prepaid wireless broadband, where we have seen a 97 percent year-on-year growth," McKenzie said.

"But 3G enable devices, such as tablets and embedded devices, which are coming to the market, will continue to stimulate activity in the medium term."

Legal movie downloads on the T-Box were becoming big business.

Telstra said that in the past month, "more than 90,000 movies were downloaded on the T-Box".

"The Bounty Hunter - amazingly to me - is the most popular movie," McKenzie said.

"We are also adding to our library of content. Six months ago we had 1000 movies. Today we have around 1700 movies and we expect 2000 by year end, including more high definition titles."

The cost of getting it right

Group managing director of corporate strategy Robert Nason provided some interesting colour around the rewards of getting customer service in its consumer business right.

He said that extending customer loyalty in its consumer business by three months could translate into between $50 million and $60 million a year in revenues.

One percent less churn in the same business could add between $40 million and $50 million to its bottom line.

And if one in ten customers "increased their product holding with Telstra by one product", it could add up to $450 million in revenues to the company, he said.

"That's the size of the prize of getting [Project New] right," Nason said.