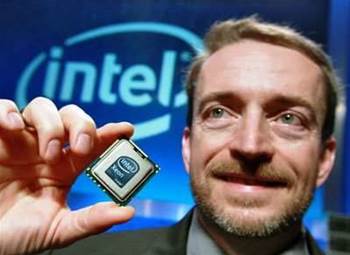 What impressed and depressed us during the show.

So another Intel Developer Forum (IDF) has come to an end.

IDF is Intel’s main forum for new releases and updates on the older products and as such is key to understanding the company’s direction. It’s also a chance for developers, manufacturers and academics to meet and exchange ideas that will shape the direction of computing in the next decade.

While we’ve got lots of stories and video from the show there’s a lot to process in the three days. Visitors are bombarded with new information about what’s coming down the line and blue-sky thinking about the future.

So I’ve selected my top five highest and lowest moments of the show, so you can get an idea of what’s important and what’s not.

USB isn’t tied to any one vendor but Jeff Ravencraft, the president of the USB Implementers Forum (USB-IF), is an Intel technology strategist in the Digital Enterprise Group (DEG) and was on the show floor showing off the first USB 3.0 products.

Rather confusingly the USB-IF is calling the technology USB Superspeed (one wonders what USB 4.0 will be called) but whatever the marketing bods do to create confusion won’t do too much harm, because the speed of the technology will ensure it’s a huge seller.

The new system increases the speed of data transmission tenfold, to a cracking 4 Gbit/s, although in the real world it’ll probably only give around 75 per cent of that. It’s stunningly fast, and pretty much means game over for FireWire.

USB 3.0 requires a new USB hub, which NEC were displaying, along with a new cable and receiver, but crucially the rectangular form-factor of the ports remains exactly the same and it will be backwards compatible with USB 2.0 devices.

By keeping ports the same customers won’t have to bin their old hardware, manufacturers won’t have to redesign systems too much and everyone benefits. It’s a textbook case of how to develop and implement a new standard.

Harrison Schmitt is, to date, the only civilian ever to have walked on the moon’s surface, and the only scientist to have made the trip as well.

Despite only getting a slot late in the day (we only found out about it when we were leaving the show and the tannoy announced his talk) he held audiences spellbound with his show on the route to the moon and why we should go back.

One point was especially telling, particularly with an IDF audience. Very few new products or systems were invented in the process of taking humans out of the gravity well. However, the speed of change in things like processor design and computing had drastically increased, which Schmitt estimated had paid back the cost of the missions seven-fold.

At the end of the presentation he hung around to chat and it was a privilege to shake hands with the great man. When asked if he got irritated by those who insist we never went to the moon he was sanguine.

The demonstrations of Light Peak at the show were interesting, but it is the future technologies it will impact on that really got people thinking.

Light Peak is an experimental optical technology that will have the capability to transfer data between devices and components at 10Gbit/s, with a theoretical maximum of 100Gbit/s predicted.

It’s also flexible, with the ability to support a wide variety of standards and connections. Suddenly the mess of connectors the average power PC user has to have could be seriously reduced.

As one Intel Fellow pointed out, we’ve run about as far as we can with wire connections and optical is the next logical step forward. The biggest barrier is cost but with Light Peak Intel appears to have cracked a major part of that.

Mobile computing is all the rage in the market at the moment and the audience was packed out to see the latest mobile chips from Intel.

The new quad-core i7 processors look the absolute bomb. They are fast, power-efficient but also highly customisable. If you need speed then overclocking is perfectly possible, where as if long battery life is your priority then the chips can shut down individual cores to save on power use.

Manufacturers are keen to get the new chips into systems as soon as possible, for two reasons. Firstly the chips really are something that will excite the business and consumer markets and they offer original equipment manufacturers a vast range of new system designs to get sales rising again.

However the chips, like any new hardware, are a bit pricey and if demand is strong it will help people get used to the idea of spending large amounts of cash on notebooks again. With netbooks selling well several manufacturers are worried that they will be losing sales to the low-priced systems and the i7 could help with that.

Without a shadow of a doubt Westmere was the star of IDF, and so it was fitting that Sean Maloney, currently Intel's golden boy, should get to show it off.

Westmere looks to have more grunt and features than almost any mainstream processor technology at the moment and will be crucial to securing Intel’s future in the server rooms and data centres of tomorrow. As the industry moves towards mass virtualisation and a bigger emphasis on cloud computing the new chip will be vital.

Intel has also packed a lot of stuff onto the die itself, including support for AES encryption, a very welcome development in today’s security-conscious times.

Westmere is also Intel’s first 32nm mainstream processor and as such is key to the company’s move to scale down processor technology in the future. The company is refreshing its manufacturing every two years at present and is pushing down to 22nm by 2011. Looking even further ahead the company is predicting getting down to 4nm by the 2020s.

Smaller is usually better when it comes to transistors, in terms of power use and productivity of the finished product Intel claims (although AMD disagrees) and Westmere is an important step on the road.

Read on for the low points of this year's event.

Next Page 1 2 Single page
Got a news tip for our journalists? Share it with us anonymously here.
Copyright ©v3.co.uk
Tags:
developerforumgelsingerhardwarehighsintellarrabeelightspeedlowsopticalstrategywestmere