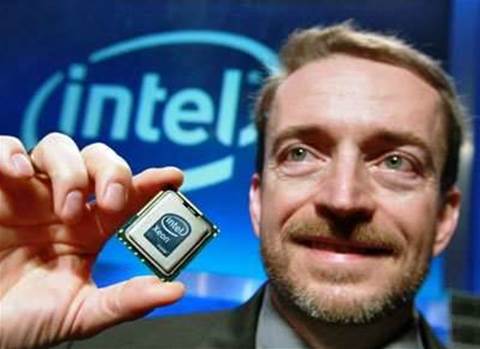 This has been my ninth IDF and I've never seen the numbers of attendees so low. Compared to the boom years IDF felt like it was deathly quiet and sections of seating were taped off in the keynotes to pack everyone in at the front of the hall.

The situation was even worse in the exhibition halls, with the number of stands from suppliers well down and Intel setting up booths of its own to keep the density of the show the same. There was some interesting stuff there to be sure, but the crowd was mainly big-name companies and there were very few of the wacky start-ups that usually make IDF such fun.

Of course Intel was upbeat about the situation, stressing that we shouldn't so much look at the size but feel the quality. They have a point in a way, but it's a worrying sign that the industry still has a long way to go before it reaches the levels of interest seen a few short years ago.

Intel's new Atom system on a chip is actually a rather clever piece of engineering, but the uses it has been designed for were a little uninspiring.

The company was keen to stress that it was not looking to reinvent the PC in TV's image but that's what it looked like to some delegates and I've got my doubts that people are quite ready to swap out a familiar technology for something new. After all, Intel's Media PC system was a horrible bit of kit when it first came out and hasn't got much traction since.

But what was really mystifying was the company's insistence that 3D TV was going to be the wave of the future. We've had people trying to flog us 3D TV systems for decades now and the technology stubbornly refuses to catch on.

People don't want to have to wear special glasses to view something, particularly in a public setting like a sports bar. And I doubt cinemas are going to rush to buy every customer a set of glasses to watch their films.

The demos delegates saw were all very impressive, once the glasses had been handed out. I have to say that seeing Bono in 3D was annoyingly tantalising; he looked almost close enough to punch.

This year's IDF had a large number of whiteboards scattered around the venue, where delegates were supposed to write their view of what the future of computing could be and what industries it would spawn.

I'm sure this idea may have sounded good in the planning meetings but the end results were less than impressive. If someone has a good business idea then they are hardly going to write it down for all the world to see and some of the delegates recognised this by suggesting sharks armed with lasers or hybrid zombie-helicopters.

Whiteboards have a place in meetings for brainstorming, but on a conference they looked a bit desperate. By the end of the show they were also covered with graffiti by people trying to use them for self promotion, which was a bit off-putting.

For a technology that was supposed to be out this year Intel is remaining very quiet about Larrabee, and everyone noticed.

Intel's forthcoming graphics processor has been talked up by the company so much in the past that you'd have expected a major push this time around to prime the market. Instead we got a grudging mention from Otellini, a short demo and virtually no technical details at all.

What we did get was a talk on programming for the chip itself, but graphics software is only part of the challenge. With AMD a clear leader in the graphics market and Nvidia firmly in second place Intel has a mountain to climb before it can come up with a product that is going to win widespread support.

It was all very disappointing, and from private chats with a couple of PC manufacturing representatives the industry isn't holding its breath for anything spectacular from Intel in the next 12 months on this front.

On the aforementioned whiteboards one message kept getting put up, and almost immediately wiped off by Intel staff - "Where's Pat." One delegate managed to keep it up by writing it in Hindi but almost everyone was missing Pat Gelsinger.

Since his surprise departure from the company just before the show the rest of the industry has been coming to terms with the departure of one of the men who typified the engineering culture of Intel. Gelsinger was a true enthusiast, his keynotes among the best attended at the show and while he was sometimes wrong about technology he was a feature of IDF.

With Gelsinger going the last remains of Intel as an engineering-led company have disappeared and it's clear the accountants and marketers are in charge now.

Of course, there are still skilled engineers in the company and will continue to be so but one effect of the bloodletting over the last few months has been to keep them firmly in their place.

Intel has undergone a sea-change in attitude and direction and it is going to be interesting to see how it develops as a company.

Some might say that the loss of engineering focus was inevitable as the market matured but on the other hand a company at the apex of the computing industry needs to have an engineering vision, and that seems to be less in focus than before.