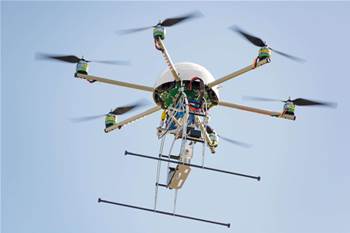 Concerned about proposed removal of licenses.

The industry body representing Australia’s airports has rejected a proposal by the country’s civil aviation authority that would allow commercial operators of small drones to fly without a licence, arguing the aircraft pose a significant safety risk.

The Civil Aviation Safety Authority in May opened up discussions with the industry on proposed changes to legislation governing all unmanned aeronautical activities, after conducting a risk assessment of remotely piloted aircraft (RPA) lighter than 2 kilos and concluding they do not represent a great risk to safety.

“The general consensus is that RPA with a gross weight of two kilograms and below have a very low kinetic energy, pose very little risk to aviation and have a low potential for harm to people and property on the ground and other airspace users,” CASA said.

It specifically suggested changing the rules to allow operators of the small commercial drones to be exempt from needing a certificate to operate the aircraft, as long as they do so within certain parameters.

The unmanned aerial vehicle (UAV) operators will need to fly the aircraft outside controlled airspace and restricted areas, be more than 5km from the boundary of an airport, and maintain a direct line of site with the aircraft.

Remotely piloted aircraft would also be required to fly only over non-populous areas, no less than 30m away from anyone else involved in operating the aircraft, be less than 400ft above the ground, and be flown during daylight hours only.

The CASA asked industry for comment on plans to amend legislation to acknowledge the existence of this new “low risk” class of RPA operations, and remove requirements for a remote pilot (RP) certificate or an unmanned aircraft system operator’s certificate (UOC) in order to operate the machines.

But in a submission to the proposal, released this week, the body representing the country’s airports - the Australian Airports Association (AAA) - raised ‘extreme’ concerns about the proposed amendments, which it said had the potential to result in a “significant safety risk” to the general public as well as piloted aircraft and airports.

AAA CEO Caroline Wilkie cited several near-miss incidents with UAVs in recent months - including in Western Australia, NSW, and Victoria - that she said could have had "catastrophic consequences”.

“The AAA believes that owners of RPAs capable of infringing on protected airspace and interfering with the safe operation of other aircraft and airports, must be required to obtain an unmanned operators certificate and be educated on the potential impact that improper use of RPA can have on aviation safety,” Wilkie wrote.

“The increased prevalence of such devices, combined with their ready availability and increased functionality, means that as an industry we are only beginning realise the dangers that unregulated use of RPA and advanced model aircraft can have on aviation safety.

“It is imperative that the licencing regime be extended to cover these RPA as soon as possible to avoid any significant incidents that will likely occur if RPA operation continues to proceed unchecked.”

The association implored CASA to consider creating a national register of RPA owners “capable of infringing protected airspace” listing their device, in order to more easily identify and penalise those who fly the aircraft inappropriately.

It also recommended a publicly accessible national map be created to identify areas where RPAs are not allowed to be flown without approval or training.