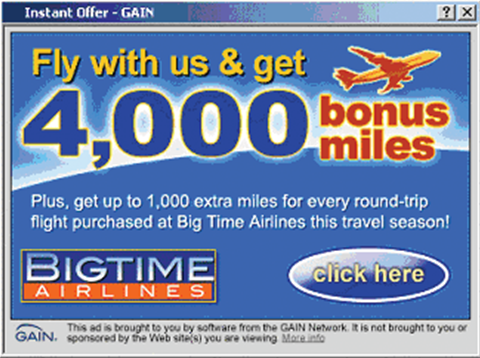 Priceline.com, Travelocity.com and Cingular Wireless have agreed to pay a fine for advertising through an illegal adware application.

The companies had purchased advertisements on DirectRevenue, a notorious maker of adware that is the target of a separate lawsuit for fraudulent software installations and serving illegal pop-up ads.

"Advertisers will now be held responsible when their ads end up on consumers' computers without full notice and consent," said Cuomo.

Companies whose banner ads show up on adware networks often hide behind the premise that they outsourced the media buying to 'outsiders'. Cuomo warned, however, that he will hold the advertiser responsible nonetheless.

"Advertisers can no longer insulate themselves from liability by turning a blind eye to how their advertisements are delivered, or by placing ads through intermediaries such as media buyers," he stated.

"New Yorkers have suffered enough with unwanted adware programs and this agreement goes a long way toward clamping down on this odious practice."

Anti-adware activists published a list last year containing the names of 12 vendors that had funded adware operations for a DirectRevenue competitor. Three of the named vendors subsequently cut their ties with the company in question.

Adware is designed to serve advertisements to the user, often through pop-ups, and is based on the sites that a user visits. The software typically collects information on surfing habits.

Such software is controversial because it uses deceptive practices to get itself installed. Adware distributors often cloud the true intentions of their applications, which often come bundled with free games or other software.

Botnet operators are also known to install adware on computers in their networks because the adware distributors offer money for each installation.

Got a news tip for our journalists? Share it with us anonymously here.
Copyright ©v3.co.uk
Tags:
adware contributions fined for funders malware security