Adelaide gets an internet-enabled bus 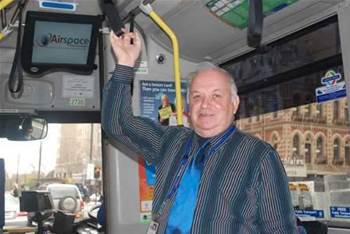 A consortium of technology companies in Adelaide has launched an internet-enabled bus that allows for free Wi-Fi access.

The i-Commute system utilises a 3G USB dongle plugged into a Wi-Fi router and allows for any Wi-Fi or Bluetooth enabled device to connect to the internet whilst in transit.

It also allows for live news and travel information to be displayed on two 19-inch screens.

MIMP General Manager, Allan Aitchison, told iTnews the kit had cost the multiple companies around $500,000 to develop and said that further buses could be deployed with the technology for approximately $10,000 each.

He also said that content filtering had been deployed by Webshield and that in the future the system, and ongoing costs, could be paid for by advertisements running on the two screens.

The companies hope to use the South Australian pilot as a case study for further deployment.

Aitchison added that his company was in consultation with another consortium of companies to participate in a Brisbane Rail tender for Wi-Fi access on trains in Queensland.