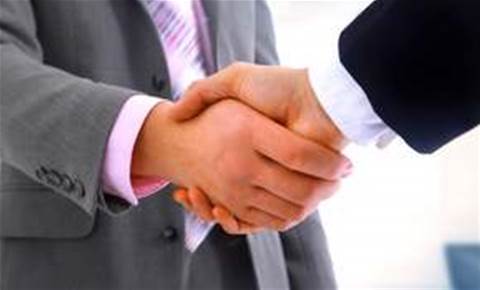 Preferred, but not exclusive, partner.

Telstra has officially announced that Accenture has signed on as preferred integration partner for the telco's enterprise cloud computing service, code-named Silver Lining.

In a press event yesterday, the two companies provided a small amount of detail on what they admitted was the "worst kept secret" in the industry - that a partnership agreement had been signed as far back as April 2010.

Executives from the two companies said there was no clear-cut delineation between which company would own the customer under the agreement.

Rather, customers would be free to choose which of the two companies they sign up with.

Telstra executives said that whilst Accenture was the telco's preferred cloud computing integration partner, the agreement was not exclusive.

Caesar said Accenture was chosen primarily as its services were complementary. She said the combination provided a far more compelling offer than competing IT services companies or international cloud computes.

"Accenture will handle the business applications and the migration, Telstra will play to its strengths on the network side," she said.

"There are no competitive tensions."

Telstra's investment in applications, she noted, was limited to T-Suite - a software-as-a-service play more suited to smaller business than enterprise and government.

She said Accenture had assisted in Telstra's own internal virtualisation strategy, which had resulted in 70 percent capital expenditure savings on server hardware and 30-40 percent savings on the IT operational costs of running that hardware.

Steve Willis, managing director of Accenture's communications and high-tech business said that the consulting organisation "rarely partners quite as deeply" as it has under the Telstra deal, but it made sense to work closely with an infrastructure partner.

"We are a capital-light company - we do not build any big data centres," he said.

The two companies had remained secretive about their agreement in order to both first "understand the accountability and role of each party" in the partnership, Willis said.

The two claim to have held closed-door meetings with executives from 150 Australian companies to "articulate the value proposition" of Telstra's cloud computing service and "listen to what customers' demand."

From these meetings they claim to have signed five customers and have 30-40 opportunities in the pipeline, with each party contributing a roughly equal share of leads.

But neither party was willing to disclose what technology platforms (in terms of hardware platform, hypervisors, operating systems, databases etc.) are on offer as part of the service.

The only information publicly available was previously reported by iTnews after a briefing at a Telstra Technology Day - in which it was revealed that Telstra's cloud compute platform (code-named Silver Lining during its development) was built on Cisco's high-end x86 UCS blade server platform, running VMware's virtualisation engine (vSphere), BMC automation and service management tools and HP monitoring tools, connected to Cisco Nexus Switches and a combination of EMC and NetApp storage.

This stack is best suited to applications running on Windows or Linux operating systems, but less so for older Unix-based applications such as those running the SPARC version of Sun's Solaris OS. This effectively rules out an entire generation of legacy enterprise applications.

When asked to clarify the platforms on offer, both companies said they expected those applications most easily ported to a virtualised server farm and delivered over a network to be migrated first, with other older legacy systems remaining on-premise until a technology fix became available.

"Almost every client we have has legacy applications that you can't virtualise easily," Willis said.

"Clients could potentially be in a hybrid situation, with some applications deployed on-premise and some in the cloud," Caesar said. "But we are not going to say - here is a list of applications we can deal with."

Both executives said Silver Lining will not be the kind of cloud compute where pricing is transparent to end users, as is the case with offers from the likes of Amazon and Microsoft.

"No, its not going to have the same transparency [as AWS, Azure etc]," Willis said. "Price is important to enterprise customers, but they are also worried about things that smaller entities are not worrying about."