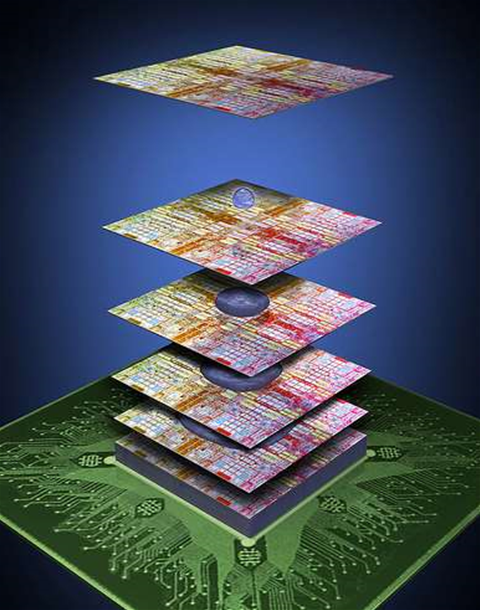 Silicon skyscrapers for smartphones by 2013.

3M has announced plans to develop a new line of electronic glues for IBM to make silicon “skyscrapers” that may find their way into tablets and smartphones.

The adhesives would allow the silicon stack to conduct heat and keep logic circuits cooler, according to IBM.

“Glue isn’t the right words—it’s more like a thermal solution that can hold chips together, conduct and be insulating,” said Bernard Meyerson, vice president of research at IBM.

IBM said it would transform semi-conductor manufacturing processes and make it possible to build much faster microprocessors layered with up to 100 separate chips.

3M and IBM were aiming to deliver a first round of three dimensional chips for smartphones by 2013, and hope to transform semiconductor manufacturing.

Today's bonding techniques could only be applied to one chip at a time, making it akin to "frosting a cake slice-by-slice", according to IBM.

By 2013, manufacturers could coat thousands of chips in a single process.

The method could leap frog the performance of existing stacking efforts known as “3D packaging”, according to Meyerson.

“Today's chips, including those containing ‘3D’ transistors, are in fact 2D chips that are still very flat structures,” said Meyerson.

“We believe we can advance the state-of-art in packaging, and create a new class of semiconductors that offer more speed and capabilities while they keep power usage low -- key requirements for many manufacturers, especially for makers of tablets and smartphones.”