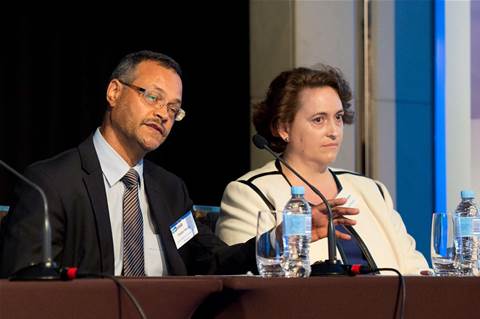 The icing on the cake was the licensing of the search engine to two similar sites serving larger markets overseas, driving direct revenue back into the business.

“What we delivered wasn’t just a new system, its a platform for innovation,” Bhatia told his peers at the CIO Strategy Summit.

Delivering specialised services to Australians that suffer from rare blood conditions costs taxpayers in the order of $200 million a year. Any wastage in the system is not looked upon favourably.

O’Halloran’s team delivered a mobile app that integrates seamlessly into the Authority’s clinical registry system, giving patients somewhat of a ‘self-management’ option for treating these conditions.

The app quite literally helps in “life or death situations”, O’Halloran told the audience, which makes him reticent to express its value in dollar terms. He nonetheless impressed the Benchmark Awards judges on the back of both high levels of user adoption and licensing deals to healthcare providers across the globe that have more than paid for the development costs of the app.

Several other Benchmarks finalists built innovations that have since been used or licensed elsewhere.

ING’s ‘Zero Touch’ designs, which enabled the bank’s Australian subsidiary to deliver the sum of its systems from a highly-standardised private cloud, have now been adopted by the bank’s global IT operations. This success helped propel COO Simon Andrews to win Finance CIO of the Year and the 2015 CIO of the Year.

Rio Tinto’s long-running investment in RTVis - the 3D visual front-end for its comprehensive mining information system - has so far resulted in a two percent increase in high-grade iron ore recovery - which equates to millions extra in the bank - and has been rolled out to four iron ore operations since it first went into production.

The mining giant is now adapting the technology for use in its coal and copper operations. This project also won the judges favour, chosen over the first stage of an ambitious system overhaul at SITA and a mobility solution at rival Fortescue Metals to see head of automation Ben Rogers named Industrial CIO of the Year.

Similarly, Pedro Harris’ vision for consolidating the NSW Government’s data centres into two purpose-built facilities and inviting suppliers into the same trusted zone to provide IT services on an as-a-service basis won’t be enjoyed by NSW Government agencies alone.

Harris told his CIO peers that other jurisdictions have been welcomed into the same network, which is “open to any buyer.”

While there are some hurdles in the way of that becoming a reality - namely data sovereignty and restrictions on buying outside of existing procurement panels - Harris has been in discussions with both the Queensland and West Australian governments about whether they could make use of the model.

NSW Board of Studies CIO Mitra Bhar is also earning the state government dividends for an internal innovation - the development of the Board’s MarkManager app for the distributed, online marking of high school examination papers has since been commercialised.

Bhar, a worthy finalist in the Education CIO of the Year category, has since won two competitive tenders, one on home soil and another in Europe, for the licensing of this simple workflow tool to other educational institutions.

“We now do marking for WA high school examinations and we’ll soon be doing a deal with a major European testing authority,” she said.

This year’s awards crowned a larger than ever contingent of CIOs that have delivered far beyond the needs of internal users - whether it was via agile projects at Domain, Mi9 and Vodafone Australia or the agility offered to these front-end teams via ‘agile infrastructure’ overhauls at the likes of Dick Smith, ING and Mercy Health.

Perhaps the ‘innovation platform’ should always have been the focus of the IT function, remarked Tennis Australia CIO and fellow finalist Samir Mahir.

“I tell my staff often - you are the business too. Does your badge have a different colour to the others? You have to think about the business - think about how to save costs and generate revenue - in everything you do.”