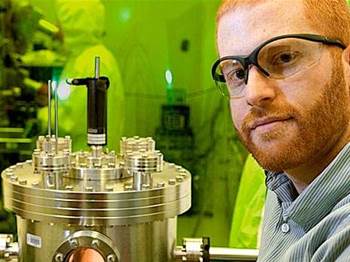 The U.S. Department of Defense has invested half a million dollars in a grant that aims to further the emerging field of quantum spin-based electronics.

Spintronic devices are expected to be faster, smaller, and smarter than present-day gadgets. Potential devices include instant-on computers, cell phones and other devices that require much less power to operate.

Appelbaum, who is an assistant professor of electrical and computer engineering at the University of Delaware, spoke to iTnews about the potentials of spintronics and his research into the semiconductor silicon to enhance the speed and design of integrated circuits for spintronics.

What first drew you to researching spintronics?

This is a new field where several fundamental challenges were, and still are, begging for solutions. The opportunity to personally make an impact on a field which has the potential to transform technology, and have fun doing it, really excited me.

How does spintronics work?

Electrons carry electric currents because they have mass and electric charge. In addition, they also have an intrinsic magnetic moment, called "spin".

However, the orientations of these electron magnetic moments are random in nonmagnetic materials, so the presence of spin can for the most part be ignored in traditional electrical engineering applications.

The field of semiconductor spintronics aims to utilise "spin-polarised" electrons, where the magnetic orientations of electrons are more or less aligned to each other, for information processing using semiconducting materials, whether it is binary or quantum logic, or for constructing better interconnects between electronic devices.

Could you please briefly explain the research that has led to you being awarded the DEPSCoR grant?

My group was the first to demonstrate -- last year, in the journal "Nature" -- spin-polarised electron injection, transport, and detection in the semiconductor silicon.

This is significant because silicon is technologically and economically the most important semiconductor, since it is the materials basis for microelectronics.

Moreover, silicon is an ideal material for spintronics because electrons in this material maintain their spin orientations for much longer than other semiconductors.

With this new grant, we hope to bring semiconductor spintronics closer to a pathway out of the lab environment and in a direction toward actual applications.

What do you feel is the most exciting possible outcome of spintronics?

Spintronics is touted as having the potential to enable low-power, smaller, faster, etc logic technologies. However, if you make a comparison to the history of many other technologies, I think the most exciting things to come out of the field will invariably be the ones not predicted a priori.

Are there any competing technologies to spintronics?

Both of these alternatives are securely in early research stages. It's impossible to predict what technology will emerge as the best to supplant present-day microelectronics technology.

How long will it be before spintronics-based devices reach the market?

Strictly speaking, there have been spintronics devices on the market for over ten years: the magnetic read head in hard drives utilises spin-polarised currents in metals and, more recently, metal/oxide tunneling devices.

The science behind this technology won Albert Fert and Peter Grunberg last year's Nobel Prize in Physics. How long until a semiconductor spintronics device reaches market? I don't know, but I hope my work brings us closer to it.
Got a news tip for our journalists? Share it with us anonymously here.