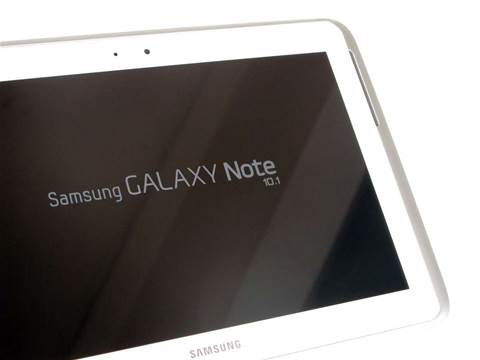 With over 10 million units sold globally, Samsung was clearly onto something with its original Galaxy Note: a 5.3-inch Android smartphone that was notable for re-introducing the stylus pen to the masses.

It was subsequently only a matter of time before Samsung chose to extend the branding to other products -- which brings us to the Galaxy Note 10.1.

As its name implies, the Galaxy Note 10.1 takes the ﻿Galaxy Note﻿ concept and applies it to a 10.1-inch tablet. Like its smartphone predecessor, the Note 10.1 comes with an 'S Pen' stylus accessory that is suitable for note-taking, menu navigtion and sketching (with varying degrees of success).

Other product highlights include an ARM cortex A9 quad-core processor running at 1.4GHz, 1GB of SDRAM, a microSD card slot, a 5-megapixel AF camera and 16GB of inbuilt flash memory. It's also flanked by a pair of stereo speakers that provide a reasonable amount of oomph.

The Note 10.1 comes with Android 4.0 (AKA Ice Cream Sandwich) out of the box, although an Android 4.1 'Jelly Bean' upgrade has been promised for the future.

Bucking the trend towards 'bling-bling' designs, Samsung has opted for a minimalist look with the Galaxy Note 10.1. It’s basically a white plastic oblong with perfunctory silver styling around the sides.

Compared to the shiny metal enclosure of the Asus Transformer Pad Infinity, the Galaxy Note 10.1’s no-frills approach almost feels cheap in its simplicity. Even the sub-$300 Google Nexus 7 has a more premium feel, courtesy of its stylish rubberised back.

While it's definitely less flashy than most of its competitors, we actually quite like the understated design. It's something that would look equally at home in an office or student's backpack. Style-conscious road warriors may need to look elsewhere, however.

When it comes to handling, the star of the show is undoubtedly the included S Pen stylus which slots into the side of the tablet while not in use.

The S Pen opens up additional functionality that is ﻿missing from most tablets -- it also helps to cut down on unsightly fingerprint smudges.

Samsung has pre-loaded a handful of stylus-friendly apps on the device, including a tweaked version of Adobe Photoshop Touch and its own S-Note software which works like a digital notepad.

We found sketching with the S Pen to be less than ideal, especially when it comes to fine detail. While it's doubtful you'll be producing any masterpieces with this thing, it provides a fun distraction and is sure to be a hit with kids.

We were also impressed by how the Galaxy Note 10.1 handled in traditional tablet form. Samsung's 'TouchWiz' interface remains one of the slickest Android UIs on the market, with new software tools such as multiscreen providing plenty of added functionality.

However, when compared to the current crop of Full HD tablets on the market such as the new Apple iPad and Asus Transformer Pad Infinity, the Note's 1280x800 display is left wanting.

While it still gets the job done, the fact is there are better tablet displays out there. On the plus side, it was perfectly responsive throughout testing in both stylus and 'finger' modes.

There is a lot of variety when it comes to tablet cameras: some vendors toss one in as a cheap afterthought, while others attempt to provide a proper photography experience that is comparable to a compact camera.

The Samsung Galaxy Note 10.1 sits somewhere in the middle with a 5-megapixel auto focus camera with LED Flash. Its output isn't something you'd want to make huge prints with, but it remains acceptable for social networking and the like. The Note 10.1 also comes with a front-facing 1.9-megapixel camera chiefly designed for video calls.

Battery life is reasonable for a 10.1in tablet -- you can expect to get around seven or eight hours of video playback inbetween charges. (Naturally, this can be extended if you avoid taxing applications and keep the WiFi switched off.)

In the Android benchmark test Quadrant, which assesses a device's processor, I/O and 3D graphics performance, the Galaxy Tab 10.1 blew away the competition with a total score of 5381. This is one of the strongest results we've seen from a tablet, with the $999 Asus Transformer Pad Infinity only managing a score of 4241 in the same test.

Connectivity options are pretty meagre: in terms of physical ports, you're limited to a micro SD card slot and a 3.5mm headphone jack. Annoyingly, a proprietary port is used for charging and USB connections, so you'll need to take extra good care of the cable.

All in all, the Samsung Galaxy Note 10.1 is difficult to place among its rivals: on the one hand, the stylus is a refreshing change from the finger-smudging UIs that mar most tablets, while the included 'S Pen' apps run the gamut from fun gimmicks to highly useful.

On the other hand, the build quality feels a bit cheap compared to some other flagship tablets we've tested – especially the non-Full HD display. In the wake of the ultra-affordable Google Nexus 7, it could also stand to lose around $100 off its price tag.

That said, the Samsung Galaxy Note 10.1 remains a decent all-rounder that's impressively fast and powerful. If you're particularly enamoured with stylus interfaces, you could certainly do worse than this tablet.