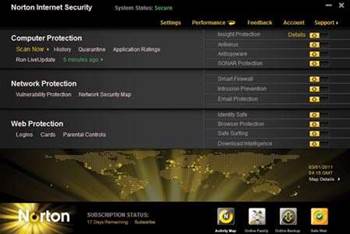 Great protection for those who don't mind a little complexity.

Norton Internet Security is a extremely nimble package. The 130MB system footprint was below average in this company, and its five-second startup impact remarkably low.

It’s all the more impressive when you note how many features are on offer. Besides the firewall, email scanner, spam filter and password safe, you also get a reputation analysis tool that takes advantage of Norton’s huge installed user base to identify suspiciously rare programs.

As an aside, we’re also impressed by Norton’s additional services such as its online Cybercrime Index which is a great resource, letting anyone look at regularly updated data about identity theft, fraud, malware and more - you don’t need to be a Norton user to access the data.

Its comprehensiveness isn’t unequivocally a good thing. Norton’s user interface is a little overcomplicated, and the chunky black-and-yellow system of links and dropdown menus is neither attractive nor particularly intuitive.

Some will appreciate having such a wealth of settings to tinker with, but we can’t help but suspect that most will be happier with Trend Micro’s slightly simpler approach.

Norton also blotted its copybook in a few places in this month’s tests. Although the firewall proved mostly robust, it bafflingly permitted our attacking PC to probe several TCP ports. In the false-positive test, it flagged a harmless -- if, admittedly, not particularly useful -- PC tune-up tool as unsafe.
For those reasons, reviewers at our sister publication PC & Tech Authority prefer Trend Micro's Titanium Internet Security software – it’s the same price but with a simplified interface. But if it’s a wide array of bells and whistles you seek, then Norton’s offering still stands out from the crowd.
Got a news tip for our journalists? Share it with us anonymously here.