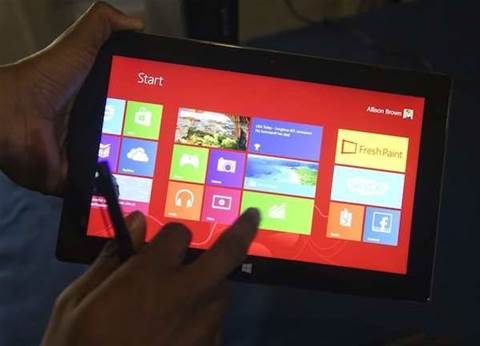 A year is a long time in the computer hardware business.

Microsoft’s Surface Pro tablet is finally available in the Australian market, after it was announced a year ago. It is aimed at those who like the Surface RT but need the Windows software compatibility it lacks.

While different under the hood, the two Microsoft tablets are fairly similar on the outside. Like the Surface RT, the Pro model is beautifully built with a magnesium alloy case. Despite the anti-fingerprint coating, the Surface Pro case gets smudgy fast, ditto the screen itself.

A lot of thought has gone into the design of the Surface Pro: the charger connector is magnetic and has a small white LED to show that it’s working. Microsoft has also put a USB port on the power brick itself, so you can charge devices directly from there. A mini Displayport is included so you can hook up the Surface Pro to larger monitors and HD TVs.

Compared to the Surface RT, which uses an NVIDIA-made Tegra processor designed by ARM, the more powerful Intel-based Pro tablet is chunkier and heavier. The Surface Pro screen is the same size as the RT one, measuring 10.6 inches diagonally but the resolution is a high 1,920 by 1,080 pixels instead of merely 1,366 by 768.

There’s more storage: our review unit came with 128GB of mSATA solid-state disk, and a 64GB model is also available; this leaves users with between 29 to 89GB of space for their files after a fresh installation of Windows 8, compared to 15 and 44GB for the Surface RT 32 and 64GB models. Up to 32GB of additional storage can be added with a MicroSD memory card.

Essentially, the Surface Pro is a very compact but normal PC, with a dual-core hyper threaded Ivy Bridge Intel Core i5 processor that runs at 1.7GHz, and which can turbo up to 2.6GHz. The 4GB of RAM is adequate for 64-bit Windows 8, but you can’t upgrade it. Nor can you bump up the capacity of the SSD later so bear this in mind at purchase time.

Two 720p resolution cameras are built into the front and rear of the Surface Pro, providing fairly average image quality in both cases.

The hardware in the Surface Pro is more than ample to provide a very good Windows 8 experience. Boot-up and wake-up times are fast, and the Surface Pro scored 3,970 in PC Mark 8’s Work test, which is just 15 per cent lower than a much larger, Core i7 equipped laptop from June last year. 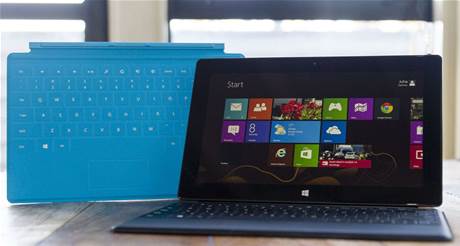 Kickstand and keyboard makes for productivity

The Surface 128GB version goes for around $1,100 including GST, but you really need to add another $170 for the Surface Type Cover.  Yes, the Type one and not the cheaper and colourful and Touch Cover because the latter doesn’t have the Function keys the former does. You’ll need those keys to drive Windows and other software properly.

As an added bonus, the Type Cover has proper keys with a decent amount of travel unlike the Touch Cover. Both have a mousepad and are OK to work with although they are small, but the Touch Cover with its dead keys takes longer to get used to.

Attach one of the keyboard covers to the super strong magnetic connector and prop up the Surface Pro on its kickstand and you can start working away on emails, documents and spreadsheets. Or browse websites, watch videos, listen to music – everything that any Windows PC can do and about as fast too.

That said, after a while you start to wonder if a notebook with a bigger keyboard and screen wouldn’t be more comfortable to use and not much heavier to lug around. However, Microsoft didn’t just slim down the hardware, the price for the Surface Pro is light too and you’ll be hard pressed to find a Windows-capable laptop with similar specifications for the same amount of money.

The Surface Pro is expensive compared to iPads though: a comparable 128GB version with retina display and Wi-Fi costs $869 and adding a wireless keyboard and a Smart Cover with stand pushes the price up to three dollars over a thousand.

As Microsoft says itself, the Surface Pro is a trade-off between performance and Windows software compatibility, and battery life and bulk. The four hour battery life quoted by Microsoft turned out to be pretty accurate. That’s mediocre compared to iPads and newer Windows 8 portables and is a major negative for the Surface Pro.

How well you get on with Windows 8 will determine how much you’ll like the Surface Pro. Here, you’ll soon discover that the very feature you waited for on the Surface Pro, namely full Windows software compatibility, comes with usability hurdles.

That said, Windows software such as Microsoft Office and web browsers run just fine. Using them is another story though. This reviewer has good eyesight, but even so the 1920 by 1080 pixel resolution on a small 10.6” screen means everything is really small in Windows 8 Desktop mode at the default 125 per cent scaling.

Bumping up the display scaling to 150 or even 200 per cent – the latter is hidden under a Custom Settings link - helps a little to make screen elements easier to see. Windows control widgets remain tricky to hit with your fingers in Desktop mode though, and some apps don’t display properly scaled up to that level.

You could of course resort to the pressure-sensitive stylus/pen included with Surface Pro to manipulate screen elements as you would with a mouse. It clips onto the magnetic power port when not in use. However, it’s awkward to use, doesn’t work fully with all applications and cannot replicate multi-touch gestures, so it’s not a full replacement for fingers.

A second problem is the strangely inconsistent support for screen portrait mode in Windows 8. The Windows 8 App Store only works in landscape orientation, ditto many of the apps themselves, which limits how you can hold the Surface Pro tablet.

Unfortunately, Microsoft has not yet released the Windows 8.1 or “Blue” update which is supposed to sort out at least some of the annoyances of its predecessor; it’s not likely to sort out the Windows 8 Apps and Desktop interface dichotomy however.

That’s unfortunate: even for a regular Windows 8 user such as this writer, the transition between the Metro interface and the traditional desktop remains jarring. If Microsoft had been braver and forced its Office division to create native Metro apps for the productivity suite, they would’ve been perfect for the Surface Pro.

Case in point: there is no Desktop mode for Windows 8 Phone, just the Metro interface and everyone’s happy with that. And, Microsoft's managed to develop a (basic) version of Office for Apple's iOS and is rumoured to be working on an Android variant too.

The biggest problem with the Surface Pro is that in June 2013, iTnews should be reviewing the second or even third-generation model, that builds on the experience of the first version while sorting out shortcomings. A year between announcement and shipping is a very long time.

New models of the Surface tablets may in fact be coming up as Microsoft’s offering both the Surface RT and Pro to TechEd North America attendees for US$99.99 and US$399.99 respectively. At those prices, run, don't walk, and buy both Surface tablets.

This and the upcoming Windows 8.1 update suggest that prospective Surface buyers are better off to wait a while so as to either get the first-generation devices at low prices or the newer ones with improved features.

The 'real Windows' version of Microsoft's Surface tablet impresses with beautiful build and ample computing power, only to disappoint through Windows 8 foibles and short battery life.