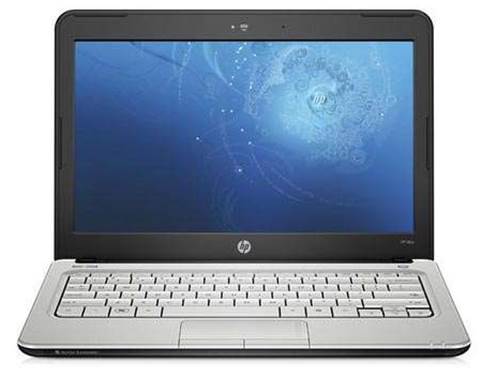 Fancy an upgrade from a netbook to a laptop, without the price? Try the 311 for the best of both worlds

It's no secret that we're fans of the HP's mini design. From the Vivienne Tam edition, through to the plainer mini 5101, HP has been setting design standards, whilst missing the boat when it comes to battery life.

With the advent of Windows 7, netbooks have suddenly expanded beyond their original scope. Gone is the 1GB limitation on RAM, to welcome in higher resolution screens and bigger form factors.

Netbooks are the new entry-level laptops, and what they bring to the table in usability and battery life is vital to their appeal.

There's no denying that when you add a touch of class as well, things are definitely looking up. The 311 doesn't seem like much of a leap forward in design, despite its good looks.

It's a larger version of the HP mini 2133, featuring the same black surround for the screen, the same silver keyboard and wrist rest. It looks, it must be said, a little plasticky with its white-patterned lid - imagine the HP Mini 1001TU in white rather than black.

Despite the plasticky touches, the HP mini 311 feels very sturdy in the hands and the chassis is pleasingly solid. There's a little too much flex in the lid for our liking, however, and the screen warps when pressure is applied.

The screen is a big improvement over previous models, not least in its overall resolution. A bump to 1366 x 768 feels more spacious, and on a screen this size, helps everything look clear and bright. The screen is semi-gloss, and that boosts colours to look punchier, with rich blues and reds.

As with the Acer Travelmate, blue is the dominant colour, making the 311 less appealing for photographic work.

The keyboard is surprisingly comfortable for long stretches of typing. Like other aspects of the 311, it's similar to the HP mini 2133, and like that diminutive HP, the 311's keys are all full size, bar the function keys. The depth of travel is improved over the 2133, and the layout is excellent.

One nice touch that HP has added is that it's also increased the size of the weakest point on a mini-laptop, the trackpad - the version on the 311 is now wider and has a two finger scroll. The buttons too are larger, and it adds a degree of comfort that helps to instantly lift this model above its smaller cousins.

Battery life is disappointing, but it's less so than with previous models of HP mini. On light use, for example, the mini 311 clocked up 5hrs 25mins. That may not sound too impressive, but it's two hours more than we've seen on previous mini models. Similarly, 2hrs 32mins on heavy use is not the best around, but it's substantially improved over the older HP minis.

The final nice addition is Altec Lansing speakers, tucked under the front of the wrist rest. There's surprising depth and detail for such a tiny set of speakers, and in combination with Nvidia Ion, should produced decent multimedia playback.

It's not the most outstanding netbook we've seen for battery life or performance, but for usability this is an absolute standout, and worth the investment if you're after a pocket-sized entry level system.