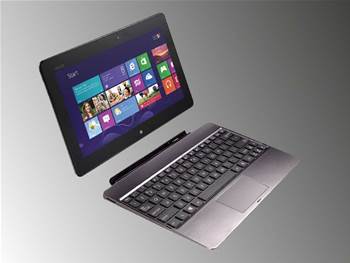 A laptop-tablet hybrid with a long battery life.

It's essentially a Windows version of the Google Android-based Asus Transformer range; complete with the same connectivity options and keyboard dock.

In other words, Microsoft users finally have a Transformer device to call their own (even if it goes by a completely different name).

With an RRP of $749, the Asus VivoTab RT might seem like a bargain to someone that requires a new laptop and tablet. However, the limitations of Windows RT combined with a scarcity of apps have slightly diminished its appeal; especially as a laptop.

That said, if you're looking for a versatile Windows-based tablet with a long-lasting battery life, you could certainly do worse than this product.

The Asus VivoTab RT is powered by a Nvidia Tegra 3 quad core processor with a clock speed of 1.6GHz. It can handle everything from office applications to 3D gaming, which makes this a good device for work and/or play.

The chip also comes with a nominal 'fifth' core for low-intensity applications.

Other noteworthy specifications include 2GB of DDR3 RAM, 32GB of internal storage, an 8MP rear-facing camera and a pair of impressively loud SonicMaster stereo speakers.

For connectivity, the Asus VivoTab RT sticks to the basics: the tablet comes with an SD card reader, a 2-in-1 audio jack and a micro HDMI input.

The keyboard dock, meanwhile, sports a solitary USB 2.0 port and a proprietry connector for charging the device. (A USB adaptor is also included in the sales package which connects to both the keyboard dock and the tablet's rear.)

Wireless connectivity is provided via 802.11b/g/n and Bluetooth 2.1. Asus ships a 4G version internationally, but only the WiFi version is currently available in Australia.

The Asus Vivo Tab RT comes with a 10.1-inch Super IPS+ touch screen with a native resolution of 1366x768 pixels. This is the same resolution as the Microsoft Surface RT tablet, but lower than competing tablets like the Asus Eee Pad Transformer Prime and Apple's new iPad.

While it might not be able to match Apple's retina display, the images it produced looked crisp and vibrant regardless. It will suit the majority of day-to-day tasks; from word processing to movie viewing.

It has also excellent viewing angles, which is handy in shared viewing situations, such as business demonstrations to clients.

When it comes to product design, Asus is clearly a proponent of the adage: "If it ain't broke, don't fix it." The VivoTab RT looks very similar to the Transformer Pad Infinity, which itself was barely distinguishable from the earlier Transformer Prime.

Indeed, if it wasn't for the tiny Windows logo adorning the tablet, we'd be hard pressed telling it apart from its Android brethren – especially when attached to the keyboard dock.

Thankfully, the Transformer Pad Infinity is one of the more stylish hybrids on the market, so the similar design isn't an issue (unless you desire something fresh-looking, that is).

The tablet and keyboard dock are both finished in dark brushed aluminium which lend the device a sophisticated air. With dimensions of 263mm × 171mm × 8mm and weighing in at 525g, it's also one of the lightest and thinnest 10.1-inch tablets on the market.

In tablet mode, we were satisfied with the way the VivoTab handled. The touch screen was very responsive during testing and the physical buttons (controlling power and volume) are within easy reach.

On the downside, we found the user interface to be a bit sluggish when it came to selecting and loading apps: the Windows RT operating system simply isn't as zippy as Android or iOS.

Personally, we don't think it's severe enough to be a deal-breaker, but prospective buyers would be wise to try before they buy.

Another downside is the Windows Store, which is currently limited by what it offers. If you're migrating from an Android or iPad tablet, it's likely that some of your favourite third-party apps will no longer be available, including popular business-friendly apps like Dropbox and Pocket/Read It Later.

With any luck, this situation will begin to change as support for the fledgling operating system grows.

Like most hybrid devices, the Asus VivoTab RT works better as a tablet than a laptop. While the keyboard is very responsive, it's simply too small to offer a seamless typing experience. Users with large fingers will need plenty of practice to master the miniaturised keys.

On the plus side, the keyboard is sturdily constructed and comes with its own inbuilt battery. This extends the tablet's battery life from nine hours to an astonishing 16.

With the popular Transformer series under its belt, Asus is arguably the king of the hybrid tablet. With the release of the Asus VivoTab RT its crown has slipped a little, but it still remains a resomable hybrid for the asking price, provided you don't mind the Windows RT OS.