Inside Woodside's business case for Watson 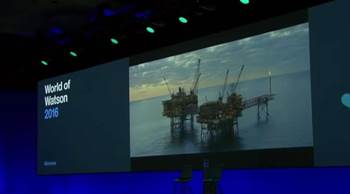 Woodside Energy has opened up on the business case driving its investment in data science, revealing a potential for payback in the billions of dollars.

Senior executives and technology leads – including managing director and CEO Peter Coleman, CTO Shaun Gregory and head of cognitive science Russell Potapinski – are attending IBM’s World of Watson in Las Vegas this week to provide a rare, detailed insight into the company’s embrace of cognitive computing.

“This is not just about retooling and having the same culture in place,” Coleman said.

“For us, we’re fundamentally changing culture … and the next [step is to make cognitive] totally inclusive in our business.”

That inclusivity is likely to come from Willow, a sophisticated new “virtual avatar” being co-developed with IBM and understood to currently be in pilot.

Staff will be able to interact with Willow using either natural language text or voice queries, with the virtual agent then polling Woodside’s IT systems in order to find them answers. “We’ve been at the forefront of work with IBM on avatars,” Woodside said in a brief video. “Our avatar is called Willow, we describe her as our virtual research assistant, making it even easier to make data-driven decisions.”

Willow represents a significant expansion in the technological capabilities of Woodside’s work with IBM Watson.

To date, most of the public focus has been on ‘Watson for Projects’ - the current name for a desktop interface that lets staff query 30 years’ of historical internal data and documents.

Less is known about ‘Watson for Drilling’, the development of which was flagged earlier this year but now appears to be the second, fully-fledged production application of the Watson technology at Woodside.

Both the projects and drilling applications of Watson appear aimed at subsets of Woodside staff, whereas Willow could lend itself to much wider use across the enterprise.

How the case for Watson was won

CEO Peter Coleman revealed for the first time how Woodside’s executive team was won over to invest in Watson and build a data science capability, and how he changed IT’s structure to enable it.

Coleman said his personal intuition played a role but the turning point came in a meeting with Woodside’s executive team discussing cognitive computing and what it could bring to the table.

“[The business case for cognitive] is often very hard to define, particularly in a business like ours, [because it falls into] the value-add or the knowledge area,” he said.

“It’s easy in the manufacturing part [of the business] because I can count how efficient I’ve become, but in the other areas it becomes more subjective.”

But Coleman said he saw the potential for cognitive to help unlock savings in cost and schedule overruns that often occur on multi-billion dollar projects in the oil and gas industry.

“We’d just built a $15 billion project [Woodside’s flagship Pluto LNG] and in my business we don’t get out of bed in the morning for less than $1 billion,” he said.

“You can see the shuffling in the seats. This is only two years after the project was complete.

“We could not consistently give five in our executive team. If we can’t give five, how in the heck do we think the rest of the organisation’s going to do it? And so we said, ‘there’s the business case’.”

That test confirmed suspicions Coleman had about the way both Woodside and even its peers approached new gas projects.

“It became very evident to me early on that we spent a lot of time building big things but each time we built one we [would] have to go back and recall what we did last time,” he said.

“We [would] have to find the people who were around last time that did [the work].”

That can be problematic on such large-scale engineering projects, he noted,

“The reality is by the time you get to be a project director on a $15 billion project, it’s probably your last project, because you’re at a point in your career where you’ve built a set of competencies and experiences that you’re down to your last project,” Coleman said.

“So you do that one, you put a bow on it, you shake hands, you take the gold watch, you move out and you’re lost to the organisation.

“We were continually faced with this time and time again in an industry that in the last ten years has missed on both cost and schedule promises to our shareholders in the range of 25 to 40 percent. On a $15 billion project, that’s a lot of money.”

Taking IT from finance

Once the call had been made to invest in Watson, Coleman set about putting in place a structure that would allow Woodside’s fresh investment in technology to be successful.

“The first thing to do was to define what we wanted computing to be,” he said.

“For us it was interesting because IT had always reported to the CFO, and of course when IT reports to the CFO it becomes a cost centre and it gets managed in that way.

“We’ve got IT somewhere else in our organisation now, and [that lets you] say, ‘OK, now you become enablers to the business being able to achieve the performance outcomes that we’re looking for’.”

Coleman switched the reporting line for IT directly through to himself.

“We had to have them reporting to the CEO,” he said.

“We had to put them into almost a ‘box’, so to speak, but it was a precious box of jewels, and [it was to give them] a license to go and think and innovate.

“The key thing was giving them protection from the organisational processes to allow them to ... bring back some new ideas, prototype small and make quick decisions, and then scale up as quickly as we can.”

As Watson takes up a more prominent position in Woodside’s business, the company has reached a turning point in its adoption of cognitive computing and data science more generally.

“We’ve moved from a push,” Coleman said. “We’re now into a pull phase.”

In other words, Woodside is no longer pushing the business to adopt Watson; rather, the business is fast seeing the benefits and trying to pull the technology capability into their respective areas.

It's a key turning point for internal acceptance, and justification of Coleman's top-down backing.

However, what Coleman said had surprised him was how the organisational experience with Watson is redefining internal expectations for technology adoption.

"One of the added advantages that I didn’t really predict was the adoption of change and continuous improvement,” Coleman said.

“I come from an industry that, from proof-of-concept through to an adoption of a new technology, typically takes eight years – but we pride ourselves on technology.”

Coleman said the Watson experience was “contaminating” thinking and acceptance of these kinds of timelines.

“Our people are now challenging that eight years,” he said.

“They’re not challenging the short time for the adoption of Watson. They’re actually challenging the other and saying, ‘if I can pick up Watson to do this, why are you taking so long to adopt these other technologies?’

“It’s a benefit I didn’t see at the beginning of this, but it’s now about grabbing it.”

Ry Crozier attended IBM's World of Watson as a guest of IBM.