Is Windows 8 selling slower than Vista? 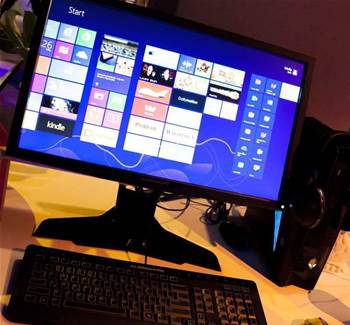 [Blog post] The new operating system, one year on.

Windows 8 has only just outsold Microsoft's worst performing operating system, Windows Vista, as it reaches its first year in the wild.

Both operating systems held around the same share of the global desktop market at the one year mark.

Windows 8 was released for general availability on October 26, 2012, much to the consternation of some loyal Windows users confused and frustrated by an entirely new interface designed with mobile in mind.

One year on, Windows 8 holds around eight percent of the global desktop market, according to internet market share reporting company Net Applications.

Comparatively, Windows 7 had almost 19 percent of the market one year on from its October 2009 launch.

According to figures released by analyst firm Gartner, Microsoft operating systems make up 94 percent, or 1.5 billion, of the 1.6 billion desktops and notebooks currently in operation.

Windows 8 and Windows 7 sold at similar volumes initially, both having recorded 100 million license sales within their first six months on the market, according to Microsoft.

Windows Vista took a twice as long (one year) to reach the 100 million threshold.

Further, the above figures don’t take into account how many users have taken advantage of the downgrade option available to Windows 8 customers, which allows them to install Windows 7 with a Windows 8 license. Microsoft also declined to provide figures on how many Windows 8 users have taken this path.

Net Applications - which like Gartner counted Microsoft OS software running on 1.5 billion PCs worldwide - reports Windows 8 currently accounts for eight percent of all global PCs in use, suggesting there are around 120 million people using Windows 8 across the globe.

Assuming a lower rate of average sales in the back half of the year, Microsoft would currently be sitting on between 170 and 190 million licenses sold.

The 60 million difference between the 120 million approximate users and the 180 million licenses estimated to have sold gives some insight into how many customers are likely to have bought the software but downgraded it to Windows 7.

Critics slammed Microsoft for, among others things, the radical change to a long-time and comfortable user interface, particularly the removal of the Start button and the introduction of the 'Metro' interface.

The introduction of a tile-based touch UI aimed to modernise Windows and bring the OS into Microsoft’s long-term vision for a cross-platform design.

Windows 8 essentially asked customers to use their PC as they would a mobile device - the results don't speak to this being a successful move.

Microsoft rectified some of these problems with its Windows 8.1 update, which re-introduced the Start button and added a range of more customisable options.

Analyst Gayla Sullivan told the Gartner Symposium this week that many organisations had decided to skip Windows 8 in favour of the next release.

"I don't think customers saw the features and benefits they had hoped for," Sullivan said. "I think it was very disappointing. When you move your operating system its a huge transition - if there is not enough benefit there, it's a hassle for the whole organisation."

Find out which businesses are actually using it...