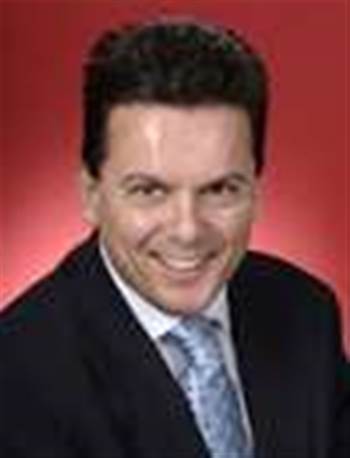 No sweeter deals for "efficiency" gains.

Independent Senator Nick Xenophon has outlined "significant problems" he has with provisions of the NBN Companies Bill that could allow NBN Co to vary price terms to access seekers in return for an "efficiency" gain.

The controversial provisions had already come under significant scrutiny from the coalition and minor parties at Senate committee hearings earlier this month.

It was viewed as a mechanism that could allow Telstra – and potentially Optus – to use their size to get more favourable price terms from NBN Co (hence the debate being known as 'volume discounts').

Xenophon indicated today his concerns about volume discounting had not been allayed NBN Co chief Mike Quigley's assurances at a conference earlier this month [pdf].

"The provision for volume discounting still exists in the legislation," Xenophon told the Senate today. "I think that's problematic.

"I believe NBN Co should treat all customers equally. I don't believe they should be allowed to give preferential prices or treatment. The Government should not be playing favourites, providing sweeter deals to one [access seeker] over another."

The NBN Companies Bill explanatory memorandum stated that "as a basic principle, NBN Co must not discriminate between access seekers".

"However, NBN Co will be permitted to negotiate with individual access seekers to vary the terms and conditions... but only under clearly specified criteria and subject to ACCC oversight," the memorandum stated.

There were three criteria available to NBN Co to vary its terms and conditions. Of the three, the third was most contentious; that "NBN Co may offer different terms if this aids efficiency, and access seekers in like circumstances have an equal opportunity to benefit from any variations."

The definition of "efficiency" was a key sticking point for the Government to win support for the provision.

"The word 'efficiency' is so broad that any lawyer can drive a truck through it, and it is unclear whether those efficiency gains, as the legislation is currently drafted, would be enjoyed by NBN Co, by an RSP or by the end user," Internet Society of Australia director Paul Brookes told a Senate Committee earlier this month.

NBN Co and Optus attempted to define the types of efficiencies they believed could warrant some sort of access discount being applied.

"You could, for example, enter a long-term contract which might lower the risk profile of NBN Co, which could have a cost benefit," Optus general manager of interconnect and economic regulation Andrew Sheridan said.

Optus corporate affairs director Maha Krishnapillai added: "Normal commercial practices say that if you are effectively helping the supplier in terms of their cost of providing services to you— effectively aiding efficiency—then there should be some recognition of that in the commercial discussions.

"There would be a range of issues, as with any commercial negotiation—longer contract times, interaction in operating costs and taking on other areas—that would reduce the cost for NBN Co. That should flow through."

NBN Co senior regulatory adviser James Endres said there were "lots" of potential efficiency benefits that could warrant a volume discount but it would be up to access seekers to make their case.

"There are a range of different things ranging from technical and operational efficiencies in billing or ordering and provisioning; or potentially, there could be things like lowering our risk profile and that may result in a lower cost of capital for us somewhere down the track, immediately or even further," Endres noted.

"[But] it is up to the industry to come to us with proposals about where they believe they can bring us cost savings and efficiency gains. Then we can go away, measure them and then say, 'Look, this is what it is worth to us'... and then we would negotiate on that basis."

NBN Co said that any variation in standard terms provided to one access seeker would be vetted by the ACCC, published and be available to anyone else able to "bring to bear the same efficiencies".

The ACCC's communications group general manager Michael Cosgrave told the Senate Committee that the commission "would want to see some fairly convincing information that suggested to us that such volume discounts did aid efficiency".

"You would presume we would look at them fairly closely, particularly in the early days of the [NBN] regime," Cosgrave said.

"What I would expect is that the ACCC will approach the concept of efficiency in the existing legislation in the same way that it does in all its regulatory roles, which is that it will consider efficiency as an economic concept and not a more loosely defined concept.