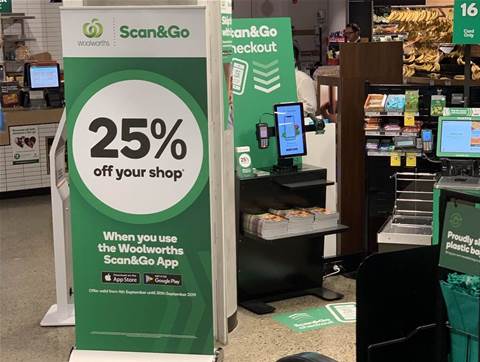 Aggressive offer as it chases sign-ups.

Woolworths is offering a 25 percent discount on groceries for the rest of the month to users of its Scan&Go service, which allows consumers to scan and pay for items using their smartphone.

The retailer said that the discount will be applied to “every shop up to a limit of $1000.00 per shop” from September 4 to 30 “or such other period of time as Woolworths may determine in its discretion”.

Technically, though, the app can only process payments of $250 or less in supermarkets, and $50 or less in smaller ‘Metro’ stores.

Larger purchases can still be made, but the customer would “need a physical credit or debit card to complete [the] transaction at the Scan&Go checkout”, Woolworths said.

Currently, Scan&Go is offered at supermarkets in the Sydney suburbs of Mona Vale and Double Bay.

It is also available for use in Metro stores in Pitt Street, York Street, George Street and the MetCentre in Sydney’s CBD.

Scan&Go first appeared in the Double Bay supermarket in September last year. It was expanded to five more Sydney stores in June this year.

To use it, participants need to download the app. They must also enable Bluetooth and location services on their debice, be a Woolworths Rewards loyalty member, and add a means of payment to the app.

"A key part of the trial is testing the accuracy and reliability of our Scan&Go app. From time to time we will conduct scan checks to see how this new technology is performing," Woolworths said in T&Cs.