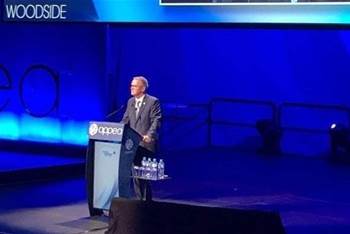 Woodside Energy is set to attach thousands of home-built magnetic sensors to equipment in its gas plants to “improve monitoring of machine health”.

CEO Peter Coleman told the APPEA conference in Adelaide yesterday that the company planned to “install a whole new data-driven nerve system” in the core of its operations.

The company designed the 7cm by 12cm “smart sensors” in-house, “which can sense and transmit data about how equipment is performing”.

The sensors will do this by monitoring for changes in vibrations and temperature, with data transmitted back to a central point in real-time.

They can be easily retrofitted to existing plant, since they can be attached using magnets.

Had the company bought sensors commercially and tried to properly fit them to equipment, the unit cost would have ballooned to “around $30,000”, Coleman said.

Instead, Woodside had managed to get the price to purchase and install a device down “to less than $300”.

“This is significant because we intend to deploy thousands per facility to give us a wealth of data that we have not had before.”

Coleman said that Woodside would run the sensor data through undisclosed “algorithms to analyse and improve how our facilities operate.”

“These technologies will give us the ability to detect and respond to emerging issues in
our facilities before they disrupt operations,” he said.

The project appears to signal a new level of ambition for Woodside Energy.

The company already operates one of Australia’s largest internet of things (IoT) and analytics projects at its Pluto liquefied natural gas (LNG) facility, where it has a network of some 200,000 sensors.

Data from those 200,000 sensors is fed into AWS where it is analysed to prevent costly plant shutdowns.

The big difference between the Pluto IoT network and the newer project is that Pluto harnessed a huge array of sensors that were already incorporated into machines.

The newer project seems more about retrofitting sensors to equipment that never had that kind of capability in the first place.

Two years ago, when the Pluto 200,000 sensors project was revealed, Woodside indicated that it would expand its sensor-based big data efforts to the remaining 75 percent of its onshore and offshore operations, with plans to eventually have such capabilities throughout its entire business.

News of the magnetic sensors appears to lay the technological foundations to begin to realise those expansion plans.

Coleman also used the conference to announce an agreement with CSIRO to “collaborate on transforming existing off-the-shelf vehicles into autonomous robotic systems.”

He did not provide further details of that particular piece of work.