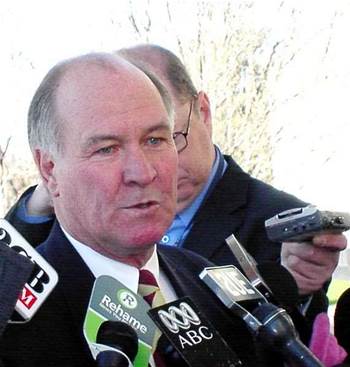 Independent MP Tony Windsor has challenged the Gillard government to provide "the real figure" for its broadband plan for Australia.

Windsor, one of five independent MP's likely to shape the leadership of the next Federal Government, told the National Press Club in Canberra that the $43 billion price tag for Labor's NBN plan is little more than a  "figure that's bandied about."

Windsor said he would like more information about the $43 billion price tag.

"I haven't seen the real number," the member for New England said. "In fact, I think it's fictitious. We want to find out what the real number is. There should be a trail that leads us to that."

Windsor spoke at the Press Club in a joint address with fellow independents Rob Oakeshott and Bob Katter as well as new Greens MP Adam Bandt.

One of the first areas to be connected to the NBN is Armidale, a regional centre in Windsor's northern New South Wales electorate.

Afterwards, Katter warned that he was not satisfied with the Coalition's broadband plans.

"Outside of the metropolitan areas, we've had a dreadful experience with privatisation," Mr Katter said.

"We've had a dreadful experience with privatisation and they can give us all the undertakings in the world. Really when you go to a privatised scheme, the cities will get everything and [regional areas will] get nothing.

The opposition leader Tony Abbott suggested yesterday that he might be able to allay some of the independents' concerns on the state of regional telecommunications.

Abbott said he was confident that there is more than enough capacity in the Coalition's broadband policy to deliver the kind of improved services regional MPs would want.