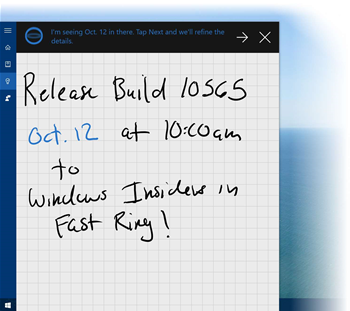 Existing Win7/8/8.1 product keys can be used for activation.

Microsoft is continuing to bake new features and improvements into Windows 10, today releasing a new build for its Insider Preview program participants to try out.

The company's general manager of operating systems, Gabe Aul, listed several of the changes in a blog post, including the integration of the Skype communications app into Windows 10.

As previously signalled by Microsoft, Skype functions will be available through the Messaging, Phone and Skype video universal apps in Windows 10.

The Skype integration will be available on Windows 10 for PCs initially, and arrive at insider previews of Windows 10 Mobile at a later stage.

Existing Windows 7, 8 and 8.1 product keys can be used to activate the free upgrades to Windows 10 that Microsoft provides for users who have bought a licensed, earlier version of the operating system.

It is also possible to use product keys from earlier Windows versions when performing a clean install of the newly-released Windows 10 Insider Preview, Aul said.

Microsoft's personal digital assistant Cortana has also received a features boost in build 10565 of Windows 10, and is now able to decipher users' "inked" or hand-written notes, and set reminders based on locations, times and numbers, Aul said.

Cortana can track activities such as movie bookings and other ticketed events, and can request and track Uber transport directly from within the app.

The Edge web browser - which will eventually replace Internet Explorer in Windows - has been given a feature that lets users hover over tabs to preview loaded pages, and can also now sync Favourites and Reading List items.

Title bars in folder windows are darker and more vibrant, and icons for devices have been given a makeover. Context menus that were too big for mouse use in build 10525 of Windows 10 have been made smaller.

Microsoft has temporarily removed the WebM and VP9 video codecs from the Insider Preview builds. However, VP9 will return soon, Aul said, after Microsoft has developed a version of it for Windows.