Will Australian train stations one day be free of turnstiles? 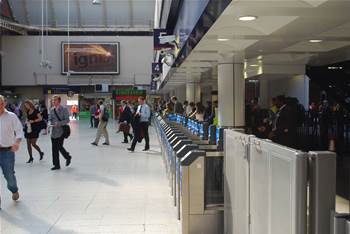 The UK’s forward-thinking transport agencies are preparing for a not-too-distant future where railway stations can no longer accommodate growing hordes of passengers waiting to tap or swipe their way through a ticketing gate.

The government’s Rail Safety and Standards Board has funded three separate investigations into the kinds of technologies that will enable existing transport infrastructure to cope with a forecast doubling in passenger volumes in the next 20 years - technologies that are more than likely to trickle down to Australia’s major cities in due course.

The funding has gone to private sector outfits looking for a way to validate whether a passenger has paid their fare, without creating a bottleneck. They are forcing a rethink of how revenue is collected in an environment where many transport operators don’t have the option of radically expanding their physical footprint.

Paul Monk, who is vice president of global engineering at the firm behind most of London's turnstiles, Cubic, said it’s already common to see as many as 20 people queued up behind a ticketing gate in the city’s peak hour.

The company, which also built public transport electronic ticketing systems for Sydney and Brisbane, is one of three organisations leading a gateless ticketing prototype for the RSSB.

As part of the 18 month program, Monk told iTnews Cubic was looking at integrating a range of capabilities from bluetooth, phone apps and face matching to its ‘FasTrack’ prototyping expedition.

“We are putting everything into the pot and challenging the underpinning principles of the model we have,” he said.

One option is a version of the “motorway tolling model” where passengers opt-in to an account payment scheme on their phone, and bluetooth sensors detect who they are and charge them accordingly as they pass through - much like an e-Tag on the Sydney Harbour Bridge.

Another approach Cubic is looking at involves placing ticket validation bays in non-congested spots around the exterior of a station and using facial recognition to match the faces of fare payers against the individual presenting themselves to board a train.

“We don’t need to know who that person is, just that they are the same person [who paid for a ticket],” he said.

UK ticketing outfit ByteToken has also been invited to test out its ideas. It’s “Kwikgate” approach has been to create a turnstile that requires no intervention, rather than doing away with the gate altogether.

ByteToken’s Ross Smith said the goal was to radically simplify the process through automation.

“Bluetooth beacons are set above the fare gate monitor as the user approaches and exchanges data to ensure the user has a valid ticket,” he said.

“Once validated the Kwikgate system waits until they reach a trigger point - the point at which the user arrives at the fare gate - then a command signal is sent to the gate for it to open for the user.”

The strength of a Bluetooth signal and a 3D imaging sensor is being used to detect when the passenger is approaching.

Smith said there has already been "considerable interest in Kwikgate both in Europe and further afield, and there are several customers interested in taking the product to the next level”.

The RSSB scheme still has several months to run, and it could still be some time before Britain’s giant and complex franchised transport network starts to seize on its findings.

But Australian state and territory governments have already been quick off the mark to pick up technologies first seen in London, meaning it's unlikely to be too long before the UK's latest ticketing innovations make their way down under.