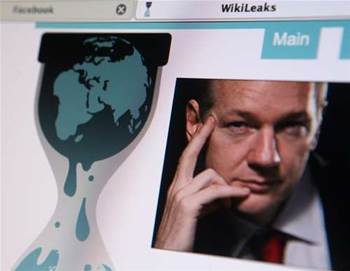 1715 Operation Black Face this Saturday is the latest Assange splinter project that aims to marry protests in the real and cyber worlds by having participants wear black or post a black profile picture of themselves online.

The very same day supporters of life, liberty, freedom and transparency would write a common e-mail to UK Supreme Court (to) protect whistleblowers and free media. This message would demonstrate the strength of the silent majority which today, is in favor of Julian and friends and against the governments.

Iceland's parliamentarians have called Mastercard and Visa executives to account for stopping payments to Wikileaks with the threat they may yank the companies' licences, reports the Reykjavik Grapevine. "People wanted to know on what legal grounds the ban was taken, but no one could answer it. They said this decision was taken by foreign sources," says committee chairman Robert Marshall. The CEO of the company that operates the credit cards in that country said his business Valitor had nothing to do with the decision.

1650 Based on information in a Swedish TV documentary, an anti-Anonymous blogger proposes that Assange is behind the recent attacks on the likes of Mastercard and PayPal and is directing the latest Operation Leakspin attempt to crowdsource analysis of the remaining 250,000 diplomatic cables. Unhacktheplanet claims Assange is trying an elaborate social engineering experiment to fundamentally rewire the world's social order.

1630 University of Sydney IT academic Michael Fry says Australians who helped bring down global websites as part of Anonymous Operation Payback could face prosecution and jail.

Usually DDOS attacks occur after 'botmasters' illegally take over thousands of computers, turning them into 'zombies' for illegal activities. The primary users are unaware their computer has been infected.

What is fascinating and novel here is that the latest attacks involved thousands of willing participants who knowingly allowed their machines to be infected in order to partcipate in politically motivated attacks. This suggests a huge level of emotive support for WikiLeaks and its activities, but also a level of naivety. It seems that members of the group downloaded publicly available LOIC code, but took no steps to evade discovery and identification. This makes members vulnerable to detection, potential prosecution and counter-cyberattack. Counter-attacks have indeed happened today, initiated by US political groups.

Whether or not legal action is taken against offending participants is a thorny issue. This cyber war is gathering pace and prosecutions could generate another round of attacks. Either way we are seeing the beginning of a new era in political cyber-warfare with the widespread use of botnets.

1515 Corporates' attacks on Wikileaks may lead to rise of peer-to-peer distributed DNS to replace ICANN and overthrow of PayPal's online financial services and payments monopoly through Bitcoin.

Russia Today airs concerns that US Government will use the latest Wikileaks drip-feed as a pretext to legislate a "cyber-Patriot Act" to crack down on dissent on the global internet.

Early cut of Wikileaks documentary WikiRebels on YouTube: "If you engage in immoral, unjust behaviour it will be found out and you will suffer the consequences".

"The majority of the general public has neither the time, interest or resources to analyse Wikileaks' material," say Swedish documentary makers. Assange came to the conclusion that mainstream "media are the only channels with resources and motivation required to have a real impact" on public perception.

"In 2006 we hoped the public would write analysis articles collaboratively," Assange says of why there's a "wiki" in Wikileaks but that turned out to be "not at all true".

A video walkthrough of the "James Bond villain" Pionen data center in Sweden that hosts Wikileaks. Photos and schematics.

Internet research company Netcraft contradicted Mastercard's claims last week that the Anonymous attack on the credit card company's servers didn't affect processing of transactions: "(M)any consumers reporting that they were unable to pay for goods online. Businesses reported a corresponding drop in trade during that first attack." Netcraft also reported an outage at Amazon's Ireland data centre (the sites are now back up) although it was unknown if it was related to Anonymous' actions, the British researcher said. Researcher Paul Mutton said the Operation Payback IRC network had grown to 18 servers. The company has a handy outage table showing which sites are suffering.

Confusion reigned over a report spurred by a Google search whether the CIA had set up a honeypot fake Wikileaks mirror to ensare unsuspectign downloaders however veteran tech reporter and CBS News columnist Declan Mccullagh disputed this claim.

Dutch police arrested a second teen on suspicion of being engaged in the Anonymous attacks against core infrastructure and the collective issued a statement about the arrest of the first 16-year-old.

The US military began removing or disabling USB ports and other ways to remove data from PCs and threatened to court martial anyone found circumventing the measure. The US Government is in full data lockdown mode, investigating ways to prevent a recurrence of the massive leak, suspected to have been carried out be soldier Bradley Manning.

The author of a book that analysed the first tranche of Wikileaks diplomatic cables yanked it from the Amazon store after the online bookseller suffered attacks on its infrastructure from Anonymous angered over its apparent hypocrisy at denying service to Wikileaks while seeming to profit from the cables.

An insider account of what drives Assange by his friend and Underground co-author, University of Melbourne academic Suelette Dreyfus.

Anonymous changed its tack in the wake of Assange's arrest, shifting from denying service to its targets to crowdsourcing analysis and distilled publication of the remaining cables to speed their dissemination into the public sphere in what it calls Operation Leakspin. Panda Labs researchers say Operation Payback organisers told them they had nothing to do with the new strategy: "This highlights the fact that a group like "Anonymous" has no leaders and therefore cannot be easily controlled." 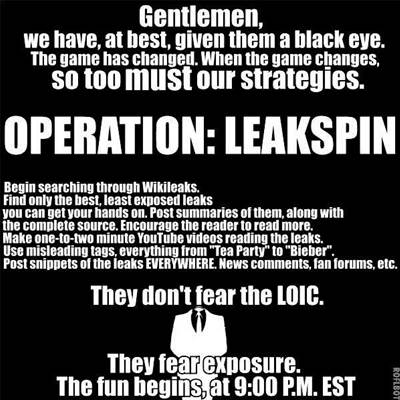