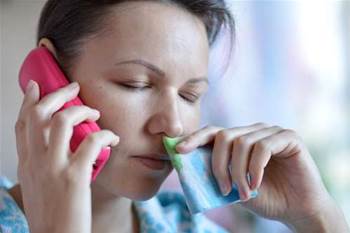 Some words of warning

Dr McDonald's case before the Administrative Appeals Tribunal is perhaps not as straightforward as to be framed solely as a test of whether IEI-EMF is grounds for workers compensation under Australian law.

A large part of the case concerns McDonald's treatment at CSIRO. McDonald told the Tribunal he was first diagnosed with electromagnetic hypersensitivity syndrome in 1993, at which point he "followed the medical advice he was given and took steps to reduce his exposure to EMF, including ... limiting his exposure to television and other electronic devices".

He began working for CSIRO a year later in 1994, informing them upfront about his condition. He was given "additional administrative support so that he was no required to do computer work". This was later withdrawn in a restructure, and then only partially reinstated.

Between April and July 2006 and again in March 2007, the CSIRO put Dr McDonald through "trials" of various pieces of IT equipment, including a "desktop computer enclosed within a Faraday cage".

A Faraday cage is an enclosure that "prevents the entry or escape of an electromagnetic field".

It is this treatment at the hands of CSIRO that the Administrative Appeals Tribunal uses to prevent having to rule on the diagnostic status of IEI-EMF.

Professor Croft is cognisant of the difficulties in the detail of the case.

"I did have a close look at that judgment and I got the impression from what the Judge said that [he] was certainly very open to the idea that [McDonald] may have been suffering from sensitivity to EMF, but the actual judgment didn't say that," Croft said.

"There wasn't any clear statement and I don't think they could get any evidence to conclude that."

The two universities will set up a Centre of Research Excellence for Population Health Research on Electromagnetic Energy in which to undertake the research.

Professor Croft is a "large part" of the centre. Separately, he also directs the Australian Centre for Electromagnetic Bioeffects Research, which was also set up with a $2.5 million federal grant.

'The end game is really to try to answer the kind of questions that the World Health Organisation have said are important in this area," Croft said.

"They pretty much come down to understanding whether there's a link between radiofrequency emissions that come from things like mobile phones, and health in general."

One area of research the new centre will tackle is whether "innocuous" effects seen in adults are stronger in children. Other research focuses on debunking criticism by activists and others of previous studies, such as the provocation works.

"The way that we're looking at it is instead of standardising testing protocols across everybody, we'll be choosing frequencies of RF that people specifically have an issue with," he said.

Croft is not alone in his pursuit for answers. An enormous study of mobile phone use and health called COSMOS is being pursued in the United Kingdom, Denmark, Sweden, Finland and the Netherlands.

It aims to follow the health of 200,000 mobile phone users over a 20 or 30 year period. One of its aims is to track "changes in occurrence of specific symptoms over time, such as headache and sleep disorders" — common symptoms associated with IEI-EMF.

Comment from the largest contributor of users to the study — the United Kingdom —was sought but iTnews did not receive a response by the time of publication.

For Croft at least, his concern is with the 3-to-8 percent of the Australian population that report symptoms of IEI-EMF.

"The thing that I think is very important — and this is something that we're not dealing with — is if we assume [the condition is] not caused by RF then we still have an important medical issue that needs to be addressed," he said.

"At the end of the day we need to know if it's caused by RF but so far we'd have to say with the research done so far there's a clear lack of evidence that it is related to RF.

"We certainly have to go further — we have to make sure of it — but so far the suggestion is that there's nothing there."

With so much attention focused on proving or disproving a link between the reported symptoms and electromagnetic fields, there is a real danger that sufferers are "falling between the cracks", according to Croft.

"By tracing everything back to RF as a possible cause, I think that we're really missing out on the actual treatment dimension for these people," he said.

"That's what I would like to see more of."