Why the Weather Bureau’s new supercomputer is a 'gamechanger' 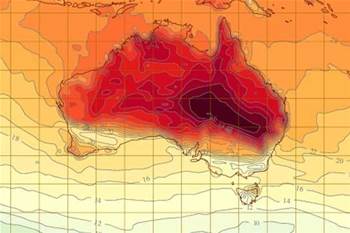 IT transformation starts to reap results.

Australians will soon have detailed weather forecasts for a six-kilometre square region of their choice delivered straight to their mobile phone, thanks to the combination of a new supercomputer, next-generation forecasting and warning system, upgraded satellites and a push into mobile at the Bureau of Meteorology.

The BoM has been in a constant process of IT transformation over the past few years, one recent pillar of which has been the introduction of its next-generation weather forecasting system.

It is based on the graphical forecast editor (GFE) bespoke system developed by the US National Weather Service, which the agency later appointed Raytheon to manage.

The BoM’s forecasters use the system to pull in numeric models of predicted weather patterns generated by the BoM’s existing supercomputer and combine them with their own knowledge, as well as data from other services throughout the world.

It gives forecasters the ability to synthesise a huge amount of information from the numeric weather predictions models.

The Bureau imported the system from the US National Weather Service and added some of its own functions on top, including changing the language of text-based weather alerts to reflect the Australian vernacular. The system will go live completely before the end of the year.

The most significant impact the new system has had is allowing BoM to produce gridded seven-day weather predictions for specific six kilometre blocks across the entire country. Prior to the system’s introduction, the BoM was only able to produce such data for capital cities.

“There was no ability to work the gridded fields with numerical models,” Dr Rob Vertessy, Director of Meteorology, told iTnews.

“We’d get outputs for set points like capital cities and output for regional centres, but not going out to seven days. So the big difference is the gridded nature of the data means you can now get a continuous surface. It is the first time we’ve had that."

A new era of supercomputing

The weather bureau is now preparing to bring the project to a close after the system’s staggered implementation over the last year, and embark on its next transformation effort, which has been facilitated by the GFE system - the introduction of a new supercomputer.

The agency late last year signalled its intention to replace its current high-performance computational (HPC) system with what it hopes will be Australia’s fastest supercomputer, allowing it to rejoin the international meteorological pack after falling behind.

The Bureau currently uses an Oracle/Sun-based HPC system running at around 104 Teraflops.

It has based the specifications for its new supercomputer on the Australian National University's 'Raijin’ supercomputer, which cost $50 million to build and around $12 million each year to run. It has a peak performance of 1.2 Petaflops.

The BoM wants a supercomputer with 50 percent more capability than Raijin and a peak performance of 1.8 Petaflops, in order to crunch the 1TB of data it currently collects every day, which is predicted to grow by 30 percent every 18 months.

“It will allow us to run our numerical weather predictions system at a much finer scale, which means we’ll pick up more detailed weather phenomena," Vertessy said.

"We’ll be able to run them more frequently than the current four times a day - the new system can be run every hour, which means the forecasts will be very fresh. And we’ll be able to do special and on-demand forecasting for very significant weather events like cyclones, bush fires and thunderstorms."

He said the ability to also run the predictions at higher resolution mean the output would be more accurate and therefore provide better critical intelligence to emergency services personnel.

“A new supercomputer will really be a gamechanger in terms of the skill and the utility value of the weather forecasts for emergency services in particular.”

It will be the agency’s eighth supercomputer. The BoM’s first was procured in 1988 and was less powerful than an iPhone 5, Vertessy said.

The agency is currently undergoing the procurement process for the new supercomputer, which it expects to finalise next year ahead of a July 2016 go-live.

The contract for the new system - which has been funded for an undisclosed amount from the Federal Government in its recent budget - will also include a new data centre for it to be housed in.

One of the final pieces of the puzzle facilitating the Bureau’s IT transformation will be access to a new satellite being introduced by the Japanese Government.

The Himawari 8 government-owned satellite will launch later this year and begin operation in 2015. Meteorological agencies around the world exchange information for free under an agreed UN charter.

“The skill of weather forecasters has improved dramatically over decades because of faster supercomputers that allow us to run models at far greater detail, and the growing ability of satellites to detect weather phenomena that were hitherto invisible,” Vertessy said.

“Himawari will, instead of us getting hourly images of the global weather patterns, give us them every ten minutes. They’ll be four times finer in terms of resolution - we’ll be able to see specific phenomena like volcanic ash that you can’t see so well in current generational satellites.”

Delivering the data to the public

But while such sophisticated technologies providing detailed forecasts may be incredibly useful, demonstrating that data to the public is another story, Vertessy said.

Over half of the 471 million people who visit the BoM website each year come from a mobile device.

The agency launched its mobile website earlier this year, and now has its sights set on apps for the three major mobile operating systems.

By the end of the year, the BoM will offer Windows Phone and iOS users a mobile application to check out weather forecasts, while Android users will have to wait until the first half of 2015.

“We had some interest in developing for Windows, and the biggest number of users that poll our website are doing so from iOS devices. It’s just played out that way,” Vertessy said.

Vertessy plans to compete with the myriad of commercial weather mobile applications that scrape data from the BoM by offering the gridded data for each six kilomtetre-squared region to users.

“[Our app] will have by far and away the most localised and accurate data,” he said.

He declined to provide details of the app’s features ahead of the the launch, but said the agency’s plan was to offer sophisticated functions that aren’t currently available in the marketplace.

“This is the thing we had to square up to the mobile strategy - whether there was a spot to simply mimic the functions of the other commoditised weather apps out there. Ours has to be differentiated with some really distinctive features - like the access to gridded info and localisation."