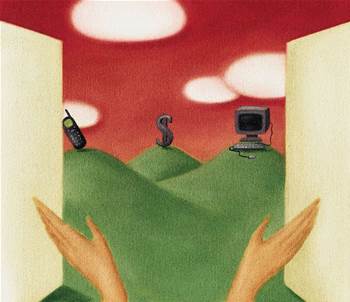 Telco customers want to know about the cost of their services, not every minute detail thrown up from a company's billing system. David Havyatt asks why communications companies can't communicate better.

With that knowledge we have built incredible new technologies in computing and telecommunications. These technologies have further enabled our human skill and desire to communicate.

But along with the newfound ability to communicate comes new found methods to confuse.

Telcos are a case in point for this phenomenon. Research conducted by the Communications Research Institute of Australia (CRIA) in 1992 for Telecom found telcos used more than 5000 unique terms in communication with customers; they really do talk a different language.

The CRIA also found that the customer service agent is often engaging in a discussion with the computer screen rather than the customer. This characteristic is created by the fact the screen is usually designed to provide information to a trained user and appears in a format that requires interpretation.

It is no wonder that economist Joshua Gans appropriated the term "Confusopoly" - "a group of companies with similar products who intentionally confuse customers instead of competing on price" from cartoonist Scott Adams to describe the telco market.

It was Gans who also pointed me to an Australian design blog Humans by Design, who recently took to redesigning bank mortgage statements in order to make them simpler, easier to understand and, ultimately, useful.

The biggest change made to the typical statement was to adopt the journalist's tool of preference - the inverted pyramid - to present the most relevant information (how much to pay) in the most prominent place.

The second change was to provide more useful graphics on informing customers of the implications their choices might have.

The issue being described here is common to many service industries and certainly no less than to telecommunications.

Survey data released by the Telecommunications Industry Ombudsman (TIO) last week details just how much hard work consumers have to go through in order to understand their telecommunications usage.

A total 55 percent of cases dealt with by the ombudsman related to a billing or payment complaint.

As a case in point, let's look at just two mobile bills.

The first is a Telstra bill. It contains a section called "service charges" that has the following entries (all for the period 22 Jul to 21 Aug);

The string of incomprehensible product names with a collection of debits and credits means nothing to the consumer, let alone the gymnastics that a $49 plan is actually billed as $48.99 and the actual net plan cost is lower than the headline rate.

The bill also indicates calls to 1300/1800 numbers aren't included but calls it a "Service Call Surcharge". Meanwhile the Mobile WAP/Internet Sessions tells the customer how much data was used in each session but provides no total.

At least the bill tries to be informative.

An Optus bill, which the customer is charged $2 to receive in paper form, informs the customer that individual call details are available online.

The rest of the bill "real estate" includes three sections advertising additional services and an entertainment event they sponsor.

There is also an uninformative chart of recent charges that simply shows the same $29 "Extreme Cap" plus the $2.20 for the bill (and the GST on the bill fee).

Research from CRIA, now called simply the Communications Research Institute, led Telecom to introduce laser-printed bills. The organisation's website suggests they have recently done a new study for Telstra but CRI advises this report is not as extensive as its earlier work.

However, the mess of paper, or PDFs for the environmentally conscious, raises the inevitable question: is the purpose of the statement to communicate with the customer or does it merely reflect what is in the company's billing system?

What matters to the customer is what their monthly service charge is and what they get for it.

Of critical interest too, is how much a customer has been using any variable component of their plan. If the plan provides two gigabytes of data, then a bill should show not only a total of the amount used for the month but also a graphical representation of the trend over previous months.

The draft report from the media regulator's Reconnecting the Customer inquiry concluded that the inability to understand offers and bills is a great source of customer dissatisfaction.

Telcos do have one of the biggest tasks of any service company. They have so many products and product components.

Sending out the number of bills they do, for the variety of services and components, the telcos have a huge communications task. No one would envy it.

But they have also been using computerised billing for longer than most.

To demonstrate that they really are "communications experts", some co-operative research on the human communications factors for complex information might be a well-placed investment before the next billing system upgrade or call centre review.

David will be part of a panel at the ACCAN National Conference 7-8 September on the topic of "Complaint Resolution Futures".

Do you have an example of a hard to read telco or other service bill?