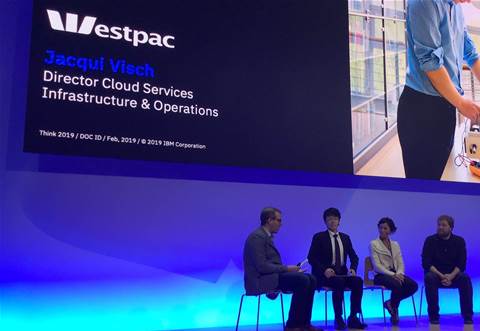 Westpac is setting up a virtual private cloud on Microsoft Azure, which will become an infrastructure option in its hybrid platform-as-a-service or HPaaS.

“We haven’t finished that delivery so it’s not a live platform - it’s an in-development platform,” Visch said.

The 'one bank' ambition

The Azure deal provides new visibility into Westpac’s HPaaS project, which first surfaced back in September 2016.

HPaaS itself is a key part of a longer running bid by Westpac to create a single common platform upon which it can run infrastructure for itself as well as St George, which it bought back in 2008.

“We have two brands and we have a number of different systems which sit behind them,” she said.

“Our business problem was therefore how do we simplify and standardise to one bank? How do we get our core into one bank, our networks aligned to one bank, but then build platforms so we can run these applications in sophisticated and modernised ways? That’s the ‘one bank’ strategy.”

HPaaS establishes a service brokerage model whereby application owners and developers are presented a catalogue of infrastructure services and patterns they can use for their own requirements.

Standardising the way infrastructure is ordered and provisioned is intended to cut significant pain from the process.

Visch likened the old internal provisioning model to a game of ‘snakes and ladders’.

“In our other environments on-premises, people would order things, get to box number 13 [on the game board], go back down to 2, roll the dice again and get all the way up to 60, sit in another queue, and take the snake back down,” she said.

“[This is about] how do we change that experience to people ordering their infrastructure and within 2-3 days having it available and then managing it from a ‘day two’ perspective, so they can provision, expand capacity, and re-provision in an automated way through a DevOps pipeline.”

The HPaaS is ultimately expected to host between 60 and 70 percent of workloads on either private or public cloud, with the remainder to stay hosted on-premises.

What this looks like from a technology choice standpoint has slowly become clear.

iTnews revealed in June last year that the first infrastructure option in HPaaS was IBM Cloud for VMware.

Users will soon be presented with a second infrastructure option, in the form of the Azure-based virtual private cloud.

At some point, a third option will be provided in the form of an on-premises private cloud, Visch said.

“In the [HPaaS] strategy we do have an onsite private [cloud option specified] but we haven’t yet made the business decision around that.”

The bank appears to be considerably more lukewarm over the possibility of adding a fourth option - in the form of public cloud - to the HPaaS.

Visch noted that the bank already hosts some workloads in AWS “but they’re for internet-facing things that have got public data in them anyway”.

That appears to suggest that, for the time being, internal applications and data are set to stay out of public cloud infrastructure.

What’s hosted in the HPaaS?

Visch told the THINK 2019 conference that the bank had so far “had to move 80 applications from one of our environments into a different one” via HPaaS.

“We’re two-thirds of the way through [that],” she said.

On the sidelines, Visch confirmed that the 80 applications was essentially “the first testbed” for migration onto the new HPaaS infrastructure.

Given there is still only one infrastructure option, the migration is essentially testing the move into IBM Cloud for VMware.

She declined to be drawn on specifics of what the testbed applications were, saying only that they were not all from a single business unit or operating area of the bank.

But Visch said that considerable effort was being put into the processes for provisioning infrastructure via the HPaaS, in addition to standing up the infrastructure options themselves.

In addition, Visch said that getting IBM Cloud for VMware ready for Westpac’s use case had seen close contact between executives on both the bank’s and IBM’s side.

“That filtered down through both organisations.”

Ry Crozier attended IBM THINK 2019 as a guest of IBM.