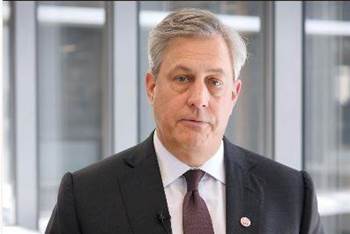 Two weeks ago to the day, Westpac’s chief executive Brian Hartzer was sitting on a stage at Sydney’s International Convention Centre with the chief executive of IBM, Ginni Rometty, being feted as the tech stalwart’s marquee Australian customer.

Today, Hartzer will be starting to clear out of his office, run over by the bus of public and political outrage after the bank owned-up to middleware failures that resulted in 23 million breaches of anti-money laundering regulations.

Hartzer, who has headed Westpac for the last four years, will be followed out the door by Westpac’s CEO Lindsay Maxsted who the besieged bank said will retire in early 2020.

Westpac’s chief financial officer, Peter King, will hold the reins of Australia’s oldest bank in the interim as it prepares for a senior executive and board transformation that will seek to pacify institutional shareholders, mum and dad investors and superannuants, regulators and politicians.

And all because of a piece of defective code, which no one seemed to want to own for around a decade, that went septic and then terminal for Hartzer and Maxsted in the space of just six days.

The origins of Westpac’s home-made horror show, explained here, are hardly a secret but will send tectonic waves across Australia’s fintech obsessed financial services sector that has been trying to either buy or outrun pure digital start-ups unencumbered by decades of legacy code that's become increasingly difficult to maintain.

The revelations that Westpac appears to have let through transactions that allegedly pointed to negligent ignorance of child exploitation are so horrendous and visceral they were ultimately unsurvivable.

But they were essentially picked-up in AUSTRAC’s dragnet of other breaches that the bank offered up in a post-Royal Commission mea culpa.

The core of the Westpac disaster remains its inability to weave together software sitting on top of older transactional systems so that it sent pings – dubbed IFTIs – to its internal compliance team and then regulators.

Westpac has conceded that a causal part of the issue was the handover and inheritance of a compliance IT system from one team to another after staff who left the bank, in one of its many recalibrations, efficiency drives and cleanouts.

The cleanout came as Gail Kelly took the reins and sought to extract better efficiency and performance from its sprawling tech estate that, like other banks, major corporates and government agencies had become bogged down under the doctrine of whole-of-enterprise IT outsourcing.

Just this month Westpac’s current chief information officer Craig Bright confirmed to iTnews that Westpac had again re-inked its overarching deal with Big Blue, albeit at a sharper price.

But that deal played second, even third fiddle to the revelation of its new Azure-based real-time data and insights platform (DDEP) that Bright has previously said will go live this month, as well as the stake Westpac has taken in 10x to reshape its digital core.

Bright describes DDEP as “a foundation for better personalisation of customer insights, offers and predictive servicing.”

“This goes to our updated thinking around cloud following technology and regulatory changes over the years, our focus being on both public and onsite environments,” Bright said on Westpac’s corporate blog literally two weeks ago.

Westpac’s thinking has certainly been updated.

The question that now begs is what strategy Westpac’s next incoming chief executive and chair will prosecute, and how much more muscle they will invest in tech reform – and to what effect.

Two decades have proven that extricating Australia’s oldest bank from ageing platforms by way of a revolving door on the IT floor has not yielded the desired results.

Call it superstition, but it might be a while before we see a Westpac chief executive live on stage with the head of Big Blue for a while yet.