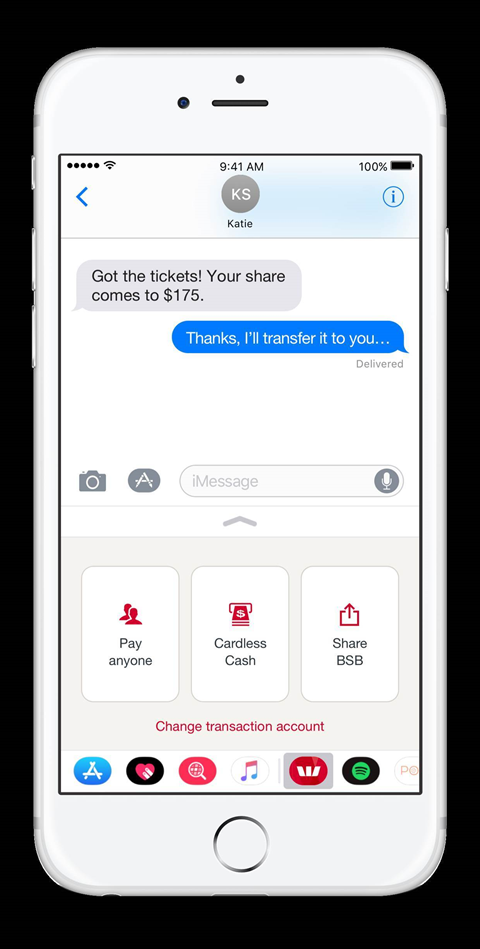 This time just for iMessage.

Westpac has brought back a feature that gives customers the ability to make payments from within a chat application after its first attempt was banned by Apple.

The tool allowed Westpac iPhone users to to make payments from within chat apps including SMS, WhatsApp and Twitter using the keyboard.

While Apple did not publicly provide a reason for its decision, the technology giant's policy is not to allow keyboard extensions for payments in apps other than its own proprietary iMessage application, for security reasons.

Westpac at the time said it was disappointed in the decision.

It has today relaunched the feature - under a new name - just for iMessage, adhering to the Apple policy.

Westpac for iMessage lets the bank's customers make payments through the iPhone chat app by clicking on the bank's icon within the conversation window.

The function also offers the ability to generate a code for Westpac's cardless cash feature, and to share BSB and account details.

It is available for iPhone users running iOS 11 and the latest version (8.4) of the Westpac iPhone application.

“Our customers want a swift, secure banking experience that fits with their lifestyle and we are always exploring ways to enhance our services," Westpac's head of consumer bank George Frazis said in a statement.

"It makes sense to pair texting and banking together – these services are an everyday part of Australians’ lives."