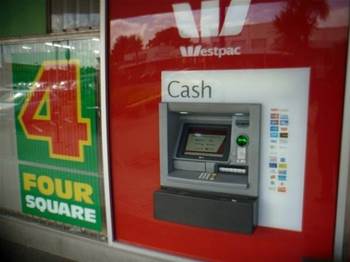 Westpac has become the latest bank to start publicly agitating for the creation of a common bank ATM utility provider, with chief executive Brian Hartzer calling the looming rationalisation “a really good idea” after the bank confirmed it ditched 349 non-branch machines over the past year.

Australia’s oldest bank on Monday confirmed it had offloaded a major part of its fleet to Spanish security giant Prosegur as part of a staged withdrawal of bank-owned and branded ATMs, a move that pits the cash management and machine maintenance company against Armaguard and NCR.

As investors bay for more savings on the back of cruelled earnings, Westpac’s boss is talking-up bank sector wide divestment of the once ground breaking machines that ushered in electronic commerce and the Eftpos network.

“Having sold our offsite ATMs in bulk to a partner that does potentially give them the critical mass to then create some other arrangements with other players who might be looking at the same challenge,” Hartzer told iTnews.

The creation of a utility could also assist with “providing services in more remote areas” where it might be otherwise be prohibitive to do so.

Westpac’s divestment of its non-branch machines is certain to place pressure on other institutions – large and small – to reconsider retention of their own fleets and figure out what stake, if any, they want in a common ATM utility.

A major issue for the financial services industry and regulators is whether there will be enough scale left in the market for more than one provider of utility services, with some believing it is more logical to go to a single regulated monopoly provider to manage the transition away from cash.

Aside from Prosegur, which took over Chubb’s cash in transit business, parties know to be interested in the formation of a utility include manufacturer NCR and Linfox-owned Armaguard.

A major issue for Armaguard is that it currently has a contract with the Commonwealth Bank that is in no hurry to dump its comparatively young machines that it sees as a strategic advantage in terms of its branch and network reach.

One of the main reasons operating ATMs has become economically unviable is that the unilaterally CBA dumped its foreign ATM withdrawal fees in 2017, forcing its rivals to do the same and sacrifice hundreds of millions of dollars of fees in the process.

The CBA also made a point of unceremoniously booting NCR off its tech estate over upgrade costs associated with making machines EMV compliant and able to read smartcards to thwart skimmers.

The question now confronting non-CBA banks is whether they jump onto the train Westpac has set in motion or continue to hold out for a better deal as the ATM market shrinks around them.

A major worry for regulators, especially the RBA, is that if ATM’s disappear too quickly and in an unmanaged manner, negative economic and social consequences could flow in areas underserviced by banks.

Previous interbank negotiations to create a common ATM utility collapsed around a year ago, despite the RBA repeatedly indicating it was amenable at a competition level to the creation of a utility.

In May NAB dumped almost 2000 ATMs from its fleet after it unplugged its infrastructure from the once heavily promoted rediATM network, that was spun out of CUSCAL.