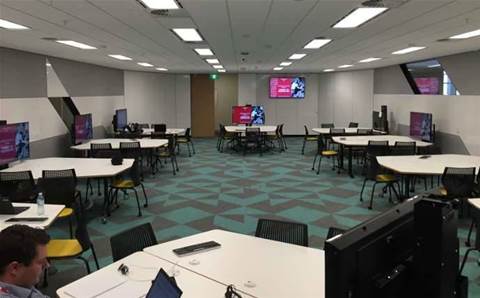 Western Sydney University has prototyped a highly collaborative A/V setup it plans to roll out to classrooms at its new Parramatta CBD campus, to allow students and academics to effortlessly share content from their personal devices.

The technology will form an integral part of the university’s new 14-story Parramatta CBD campus, which will begin taking students from the first semester of 2017.

In place of old-fashioned tutorial rooms with rows of desks facing the lecturer, the new campus will feature 24 learning studios accommodating between 50 and 60 students each.

Students will be gathered in pods of five or six with a large monitor at one end, along with additional large screens located both at the front and the back of the classroom.

By logging into the Mersive Solstice wireless collaboration solution, both students and the academic running the class will be able to share videos and other content with the screen at the end of their table from their personal smartphone, tablet or laptop.

Through a Crestron control module at the front of the room, the academic can then choose to display content shared by any of the students to all the other screens in the classroom, as well as on the main screens.

“If the academic thinks what one group is sharing or viewing is worth sharing with the entire room, then it can be switched to display on every monitor at every desk. And the academic can display the materials that they want to talk about to every monitor from the front of the room as well,” Western Sydney University chief information and digital officer Kerry Holling told iTnews.

“So it really establishes a many-to-many relationship about what can be shared to what devices in the room.

“It moves us away from a traditional hardware-driven audio-visual environment to one that’s software-driven.”

The classrooms are still equipped with a document camera, HDMI connector and DVD player if academics wish to use media that has been stored in a more traditional format.

Over the past four months, Western Sydney University has built an exact replica of the new classrooms at both its Kingswood and Parramatta campuses in order to trial the new setup.

Hidden in the ceiling of the new classrooms is a series of speakers, microphones and cameras that can be focused on any part of the room, allowing academics to move around while still being heard clearly by students.

The setup also integrates video conferencing platform Zoom, hosted remotely by AARNet, which the university has standardised on as a tool for desktop video conferencing, having already installed it in 40 meeting rooms.

Over the longer term, Holling said the university is looking to use video conferencing to offer classes that are distributed across a number of campuses.

“One of the things we’ve done successfully is conduct a classroom session where we’ve had students in both the prototype in Kingswood and the prototype in Parramatta ... [collaborate] with each other as if they’ve been in a single room,” Holling said.

“And that has a lot of other advantages. Because even though we’ve got six campuses spread across greater western Sydney, sometimes the course that a student that lives next door to a campus wants to take may only be offered somewhere else.

“But if we can use this sort of technology as scale, there’s nothing to prevent us from having students go to the campus closest to where they live and actually engage in a session even though it may be delivered from somewhere else.”

Because the main video screens at the front and back of the classroom have relegated the traditional whiteboards to the side walls of the classrooms, the cameras also serve another important function.

When an academic writes on any of the whiteboards around the room, he or she can - through a control panel - operate the cameras to zoom in on what’s being written and display it to students on the monitors at each of the pods.

The choice of platforms was informed both through an extensive evaluation process, discussions with vendors, and by looking at the setups at other universities both in Australia and the US.

“We identified what we thought were the best technologies to support the kind of collaboration that we require and I think we’ve actually designed and built in a prototype teaching space that’s world-leading in terms of how it integrates technology into the teaching process,” Holling said.

In order to fully take advantage of the technology in the new workspaces, academics will need to rethink how they deliver their curriculum.

Training academics in how to use all the new technology will therefore be a major focus of the deployment process.

“[The control module is] not necessarily something that comes automatically or intuitively to the academics, so we’ll have an intensive training and familiarisation program for the academics who will be in our Parramatta CBD location,” Holling said.

“The feedback we have received so far has been positive. It does have a profound implication on the way in which curriculum needs to be taught to the student.”