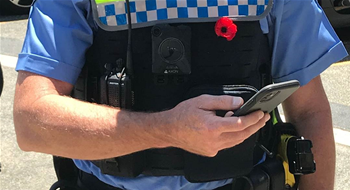 The days of standard issue police notebooks are numbered in Western Australia, with the WA Police Force now on the lookout for an electronic notebook application to use on its new fleet of Apple iPhones.

Like other law enforcement agencies, WAPOL officers have used paper-based police notebooks for decades to record observations and conversations that arise during the course of their day.

The handwritten notes are retained for two years at the officer’s local command before being transferred to the force's Records Management Centre for a further 28 years and eventually destroyed.

Information pertaining to significant unresolved investigations, however, is retained for 50 years before being transferred to WA's State Records Office.

But as reported by iTnews, WA Police last year finished a force-wide rollout of the iPhone 11 under a deal with Telstra, as part of its OneForce digital policing program.

Around 6500 iPhones – half of which were introduced in just two months – were deployed in total, with 2000 devices a direct response to the pandemic.

As part of the rollout, the force also introduced a series of applications, both off-the-shelf and customised, for officers to perform their day-to-day duties.

Following the success of initial applications, WA Police has now issued an expression of interest for an electronic notebook application and associated secure data storage to “digitally enhance record keeping”.

The application – which will ideally be delivered as a managed service – is expected be compatible with both iOS and Android devices, with officers able to capture audio, video or written notes.

To do so it will need to integrate with Motorola's computer aided dispatch (CAD) system, Microsoft Azure and Axon’s digital evidence management platform, which is hosted out of Canberra Data Centres in Canberra.

Tender documents also show that data collected through the application will be “synced seamlessly with a desktop application and vice versa”, allowing notes to be view, edited, searched and printed.

The application will similarly contain an audit trail to track any changes made to the notes, with officers also able to add tags, classifications and other searchable features such as time and date.

Long-term data storage and data accessibility is also a crucial consideration, with the currently paper-based notebook stored for at least 28 years before being destroyed.

“The system will need to be able to securely store the data product in a format that can be recovered and reviewed by future systems, without the need for proprietary software,” it said.

“The data product must be stored in commonly used industry standard formats.”