WA reveals bare-bones alpha of its answer to myGov 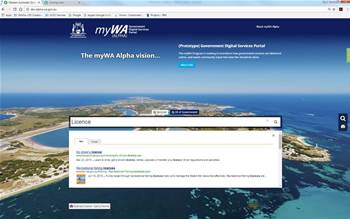 GCIO to bring public along for the dev ride.

But it is desperate to avoid the pitfalls of the federal government’s service portal effort - which has copped criticism over usability issues - by building its MyWA portal based on user feedback from day one.

Initially, the platform offers little in the way of functionality - built with $20,000 in six weeks, the alpha version of MyWA is essentially a cosmetic reorganisation of the existing wa.gov.au website, built around a free text search bar.

To date there has been no integration work done in the back-end, and searches return links from the state’s underused register of online government transactions, pointing users back to agency websites.

The Office of the Government Chief Information Officer has consciously avoided making any major design or product decisions up to this point because it will soon launch a concerted effort to collect ideas and feedback from its users about what they want.

It has decided to take a leap with an iterative approach to product development, off the back of a chequered history of IT failures.

“Any government moving into the digital space needs to deliver what the community wants to see, not just what governments think is important – our approach will go a long way toward making that happen,” Innovation Minister Bill Marmion said in a statement.

“This is a great opportunity for the public to tell us what they prefer when seeking to access government services.”

Visitors to the website - which can be found at http://alpha.wa.gov.au/ - will be asked to respond to a four-stage questionnaire about their experience rifling through the roughly 80 digital services currently available. 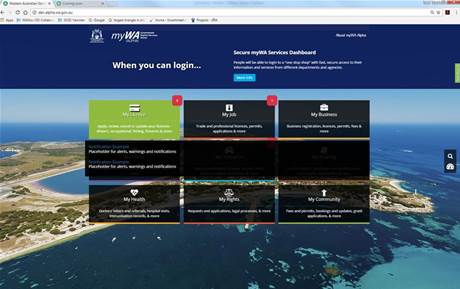 The OGCIO will then recruit “alpha testers” who will be alerted whenever new releases are deployed, and invited back to check them out.

The feedback stage will continue through the first half of 2017, before the state stands up a more “robust” production environment based on what it has learnt.

In the longer term it hopes its personalised service dashboard will allow users to tap into everything from licence renewal alerts, school assessment results, and analysis of their power usage to medical records.

The OGCIO has opted not to take the Commonwealth up on its offer of integrating into the myGov platform - or even using a white-labelled copy of the underlying technology - because it doesn’t want to be constrained by Canberra’s technology agenda.

Marmion told iTnews "the WA government will work with all tiers of government to ensure that the community’s digital experience is as seamless as possible.  It is expected that MyWA and myGov will therefore be interoperable.”