Vodafone will offer 4G while customers wait for NBN 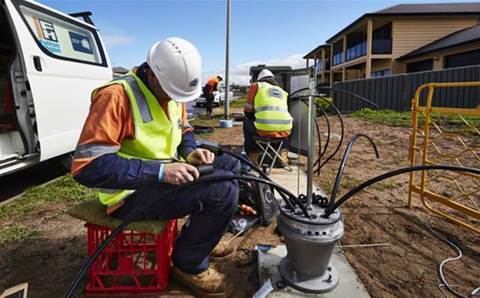 Vodafone will offer its NBN customers a temporary 12Mbps connection delivered via its mobile network while they wait for their new fixed-line service to go live.

The “back-up connection” is set to the minimum speed tier available on the NBN of 12/1Mbps.

It does not appear these speeds would be guaranteed but rather set as the “maximum” allowable speed for the back-up service, however internet usage will be “unlimited”.

Vodafone said the temporary fixed-line equivalent service on its mobile network would be offered “in-between sign-up and service installation and where repairs need to be carried out by NBN Co to resolve a fault affecting an individual customer’s fixed service".

“We have listened to people’s concerns about missing out on internet access or paying out of their own pockets for mobile data while they wait for their service to be installed or repaired,” general manager of fixed broadband Matthew Lobb said.

The back-up 3G/4G service is made possible by a “pre-installed SIM” in a wi-fi hub router that Vodafone will ship with its NBN plans.

Vodafone said the service was "complimentary", suggesting it was likely covered by the subscription cost.

A spokesperson said the telco is "not charging customers more to access the back up service. It's a value add."

Customers will not revert to the back-up mobile service during “mass NBN outages”. Vodafone did not detail why.

Advice from ISPs varies on how long it takes to get a new NBN service connected. One says “48 hours to around three weeks”, another says it “can take up to six weeks or more from the time you sign up.”

Vodafone is limiting the back-up service to 30-day bursts. A spokesperson said Vodafone anticipates an NBN activation process of "less than 30 days".

It does not appear that a customer can roll over automatically into a new 30-day period should their NBN connection remain inoperable.

"In the event that the installation process is greater than 30 days, at this point, we want to be talking to that customer directly about the delay and working with them on a specific basis," a spokesperson said.

Vodafone’s offer of a base-level NBN-like service from day one of sign-up is the latest product marketing ‘innovation’ designed to help an NBN newcomer capture market share.

Mobile virtual network operator (MVNO) Amaysim launched itself onto the NBN with a temporary offer of a free one-month trial of NBN services. The company has month-to-month contracts, which put little pressure on customers to continue if they were unsatisfied with the NBN service.

Vodafone’s offer comes at a time when governments and regulators are largely dismissive of fixed-to-mobile equivalence, and the potential for mobile broadband services to cannibalise the NBN.

Though cannibalisation is not the intention of Vodafone’s offer, the creation of the back-up service does bring the prospect of a fixed-line equivalent service into range.

It remains to be seen whether mobile network operators would be willing to offer fixed-like quotas indefinitely, which is the point at which regulators say that equivalence would need to be re-examined.