Vocus calls for rewrite of NBN statement of expectations 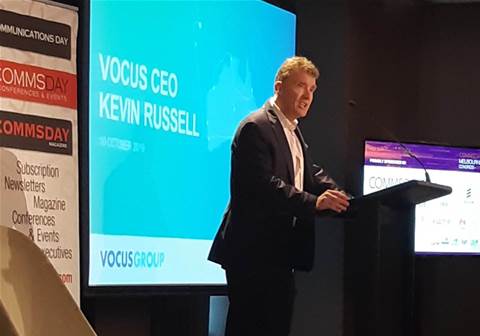 Vocus chief executive Kevin Russell has called on the government to issue a new statement of expectations for NBN Co on how it should behave in the enterprise market.

Russell told the CommsDay Summit in Melbourne that an “updated statement of expectations should lay out some clear ‘rules of engagement’ for NBN in enterprise.”

The comments come less than a day after NBN Co was formally warned by the Australian Competition and Consumer Commission (ACCC) for treating some of its telco partners more favourably than others - in breach of its non-discrimination obligations - for the purpose of selling enterprise services.

Russell said the ACCC’s intervention was “a welcome development” - but alleged the action addressed just one of behaviours that had seen NBN Co “stray” from “its position as a wholesale-only, transparent, and non-discriminatory provider.”

“Is NBN ‘wholesale-only’ when it proactively contacts one of your customers, and directly negotiates a contract that sets out buying commitments and terms of service?” Russell said.

“Is NBN ‘non-discriminatory’ when it advocates for end-users to take up a 100 percent NBN solution, then promotes certain retailers to deliver it?

“Is NBN ‘wholesale only’ when it signs contracts directly with end-users to ensure the long-term use of new fibre, when that customer has to enter a separate contract with the retailer?

“Is NBN ‘wholesale-only’ when it signs contracts directly with end-users to ensure long-term use of new fibre, when that customer has a separate contract with the retailer?

“Is NBN ‘acting in a transparent and accountable manner’ when it asks end-users to sign confidentiality agreements, and tells end-users they must seek NBN’s consent to discuss contracts with their own retailer?

“Is NBN ‘non-discriminatory’ if it provides a fibre-build quote to one retailer, but doesn’t make that quote transparent and equally available to other retailers?

“In our opinion, the answer to each of these questions is ‘no’.”

Vocus’ customers, he said, included “over 5000 enterprises and more than 60 percent of the ASX 200”, along with “over 200 Government customers at the federal, state and local levels.”

“With this context, I think we are well qualified to comment on the Australian Government’s push to fund fibre infrastructure through NBN Co’s entry into the enterprise market,” Russell said.

Where NBN Co was deploying fibre for enterprise was a particular cause of concern for Vocus, with the company’s own Melbourne office now cabled by NBN Co for business services.

“Vocus’ own Melbourne office exemplifies this problem. If you go into the communications room in the basement of 452 Flinders Street, you’ll find no fewer than six fibre providers that have invested capital to provide competitive services. And recently, NBN Co became the seventh.

“Is this really where NBN Co should be spending taxpayer dollars?

“Not only does overbuilding penalise private investment by reducing the value of existing fibre, it also takes NBN Co’s focus and dollars away from where it should be building.”

Russell said that a new statement of expectations should prevent NBN Co from: