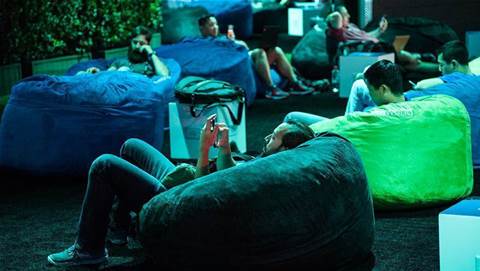 VMware kicked off its annual VMworld conference by officially launching its partnership with Amazon Web Services in Australia - and by adding a swag of enhancements to its cloud that will help it fight off competitors Microsoft and Oracle.

As reported exclusively by iTnews last week, VMware-Cloud-on-AWS has been available in Australia for some time, but the company today officially launched the service. It already has customers in Australia and New Zealand.

The company has also revealed that its first stab at cloud - vCloud Air running at Telstra - will soon be decommissioned. Around 40 users will migrate to other VMware-powered clouds from Australian or multinational providers.

VMware Cloud has also received some important updates. Among them are a new option to run on three hosts instead of four (with commensurate savings) and new migration options to make it easier to get into the cloud.

There's also the ability for VMware’s software-defined storage product VSAN to reach out beyond the physical hosts and manage capacity in AWS’ Elastic Block Store service.

The latter addition means VSANs can now scale higher than ever before into the AWS cloud, which will comfort many users who worried about capacity restrictions.

Microsegmentation is another addition, along with support for Amazon’s key management services.

Both will improve the VMware cloud’s security credentials. Adding support for AWS Direct Connect will means faster data flows to the cloud, another non-controversially beneficial tweak.

The competitively interesting stuff starts with a new “licence optimization” service for both Oracle and Microsoft applications that means users can specify the number of CPU cores they want in the VMware/AWS cloud.

This matters because Oracle is passively hostile to its software running in clouds other than its own, as demonstrated by its 2017 decision to move from per-CPU to per-core pricing.

Doing so effectively doubled the price of using clouds other than its own. Many users have virtualised Oracle-based applications tended by VMware.

Ensuring they can consider the VMware cloud without price increases is an important measure. Doing likewise for Microsoft-based workloads will have the same effect.

But VMware’s also got a little bad news for Microsoft in the form of an enhanced disaster recovery product that snapshots on-premises VMs, puts them in the cloud and then offers rapid failover from on-prem cloud.

Microsoft has had a similar service in Azure for some time and offered it for VMware-mananged VMs and those running under Hyper-V, giving it a ready way to engage with VMware users.

Disaster recovery has long been identified by VMware has as a natural cloud business. So enhancing its offering gets it to parity with Microsoft and therefore a better chance of increasing its wallet share.

iTnews was briefed on these changes before VMworld and it’s surely notable that VMware chose to make updates to its cloud service its first news from the event.

The company’s execs placed much emphasis on the fact this is the fifth update to VMware-on-AWS, which reflects the company’s plan to develop new core features for the cloud first and then trickle them down to vSphere for on-prem usage.

And VMware this week reported that - contrary to previous guidance - on-prem users keep buying its stuff and delivering revenue growth for its core compute virtualisation products.

The company attributed that growth to customers’ comfort with its cloud offerings, either on AWS or from the network of over 4,000 partners that run VMware-powered clouds.

Simon Sharwood is attending VMworld as a guest of VMware.