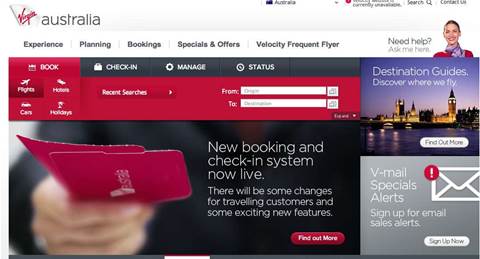 Airline expects boost from corporate and other high-yield bookings.

Virgin Australia has revealed it spent $36 million on the delivery of its new ticketing and reservation system, after it posted a first-half profit of $23 million, a 56 percent fall on the previous corresponding period.

“We are already seeing the benefits of the system, with our proportion of bookings through the Global Distribution System (GDS) increasing five-fold since it’s launch in mid-January,” Borghetti said in a statement.

He added that these bookings typically had a 10 percent yield premium over average bookings.

Virgin Australia is hoping the Sabre system will help it accelerate its growth in the corporate, government and high-yield markets.

"As a result of the new system travel agents around the world now have far greater visibility of Virgin Australia, enabling them to book our flights with more ease using a system that aligns with global standards," Borghetti said.

The airline significantly boosted the size of its in-house technology team to help deliver the new booking system, which was switched on nearly six weeks ahead of schedule.

“This has been one of our most complex migrations," Sabre Airline Solutions president Hugh Jones said in a statement.

"Transitioning to a ticketing environment, moving from two reservation systems to a third, retiring the DJ code and achieving it all in just over 12 months.”

The airline today said it would be performing ongoing work to improve the Sabre system and introduce enhancements over the next couple of months.

It also said it was on track to implement the Travelsky Global Distribution System in China by the end of June.