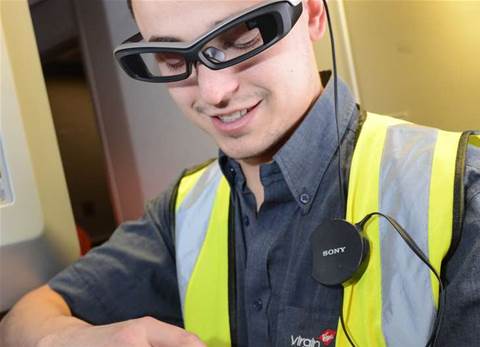 To allow more time on planes during turnaround.

British airline Virgin Atlantic has begun an eight-week trial of Sony wearable technology within its engineering department for maintenance and repairs.

The trial is being conducted at the airline's busiest airport, London Heathrow. The aim is to ascertain how the technology can be used for "real time communication between the engineering team on the aircraft and in the engineering support areas".

Engineers at both the airport and Virgin Atlantic's hangar will next week be handed the developer edition of Sony's SmartEyeglass and its SmartWatch 3 to test alongside Sony smartphones and tablets.

The SmartWatch will push notifications to engineers of any changes to job allocations or task detail. Managers will receive an alert that the engineer has read the notification.

Engineers will be able to use the SmartEyeglass to take pictures or video of the tasks they are working on.

The smart glasses will be linked to a smartphone app that will allow the engineers to submit a form requesting technical assistance. The eyewear can also be used for real-time video streaming to allow engineers back in the office to get a physical view of an issue a colleague is dealing with.

Virgin Atlantic's goal is to remove paper from some of the engineering processes and allow engineers to remain on the aircraft during turnarounds.

The airline also last year undertook a pilot of Google's Glass technology in an effort to improve efficiency and better serve customers.

The service, which was targeted at 'upper class' passengers, would allow Virgin Atlantic staff to start the check-in process for passengers and update travellers on the latest flight information, weather and local events.