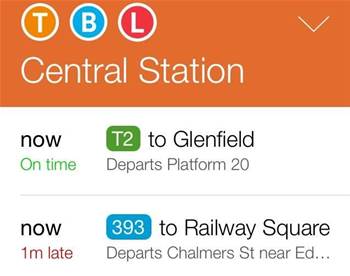 Screenshot of Sydney transport arrivals from the NextThere app

Access to long-awaited feed to arrive 'in coming weeks'.

The agency today announced it is planning to run workshops with app developers in the “coming weeks” to brainstorm new products and new uses for the GPS-driven APIs.

The initial release will include all metropolitan tram services, plus information on “some” bus services and any transport disruptions.

Trains will not be included in the initial release.

“With accurate, detailed and timely service information soon to be available, this will lead to improved customer information and coordination at transport hubs, helping customers to interchange between trains, trams and buses, and enhanced operational management capabilities for PTV and operators,” PTV’s customer experience director Alan Fedda said in a statement.

PTV plans to release the data in the commonly used GTFS format.

Transport for NSW has only licensed its data feeds to a select number of developers who came out on top of its hackathon events held in late 2012.

The news comes one month after Victoria announced it would release static timetable data in the GTFS format, meaning it could finally be integrated into Google Maps’ transport guidance, bringing it in line with fellow Australian states.

In December last year, PTV approached the market for an events coordinator to run the developer workshops, nominating March as its proposed date.

Sydney commuters already have access to real-time transport information through Transport-endorsed apps, alongside some parts of Brisbane, and users of Melbourne’s privately run Yarra Trams network. Perth residents are due to receive the capability soon.