The ombudsman's office uncovered stockpiles of ink cartridges in one school, which had placed more forward orders for ink it did not need. 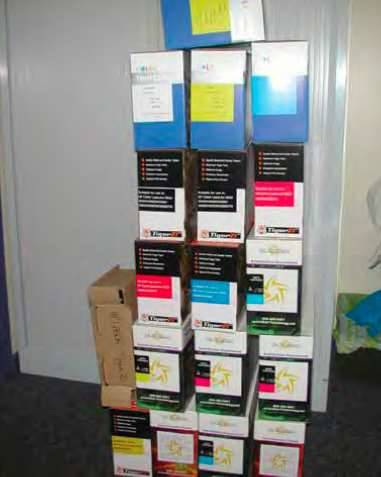 Arts Victoria also came under fire after it was revealed to have bought 40 years' worth of replacement printer toner cartridges for a Ricoh printer, even though the cartridges had a shelf life of two years.

Arts Victoria bought from a supplier that charged five times more for cartridges than printer manufacturer Ricoh, but lavished the purchaser with $8,300 in personal gifts such as Coles Myer vouchers in a single year.

The project officer responsible for the toner purchases told the ombudsman that she spent most of the gift vouchers "on food and sometimes I might have bought myself something".

She did not declare the gifts to the agency "probably because at the time they were a saving grace for me... I was financially quite strapped.

"I saw the gifts as an ability to get me through what was a very tough period of time."

That meant buying printer cartridges from approved supplier OfficeMax. However, OfficeMax did not make toner for that model of Ricoh printer, so it advised Arts Victoria to buy replacements directly from Ricoh.

Ricoh offered black replacement cartridges free of charge and colour replacements for $263 to $342.

She also started buying cartridges separately from a Victorian company in 2006. Between February 2006 and August 2009, she bought 55 black cartridges for between $799 and $899 a unit, despite the fact these were free under the Ricoh deal.

The project officer had since resigned, according to the ombudsman.

The ombudsman concluded that the officer's decision to buy outside of state government guidelines "was motivated by a desire to receive gifts for her personal benefit".

However, the ombudsman stopped short of recommending a criminal investigation into the matter.

Schools weren't bound to the state purchase contract. They could use "any source of supply when it is to the best advantage of the school" but had to demonstrate that the purchase represented "good value for money".

Despite this, several schools were netted by the ombudsman's investigation.

The ombudsman uncovered instances where the price of toner rose substantially in a short space of time, each rise bringing a larger personal gift.

Another school continued buying toner even though the price rose from $167 in January 2009 to $369 a unit in June the same year.

The same cartridges supplied by government supplier OfficeMax cost $99 each.

The school's business manager allegedly failed to notice the rising costs due to "my bad administration and practices".

In addition to buying cartridges, the manager also bought product vouchers, each for eight cartridges "to be delivered in the future" - all for a single printer.

Gifts totalling $1,077 were sent to the manager by the Victorian toner company - the same that had been supplying Arts Victoria.

They included Coles Myer vouchers the manager used to buy food for her family and a Samsung digital camera she also used personally.

She indicated she had received no procurement training and was unfamiliar with guidelines on gifts in the public service.

Yet another school was found by the ombudsman to be spending 37 percent of their annual $15,000 ICT budget on toner.

That school lost an estimated $10,000 over three years by not buying cartridges from OfficeMax.

Victoria's investigation came after a referral from the Corruption and Crime Commission of Western Australia, which found that the Victorian toner supplier had cost the WA Government some $300,000 in inflated costs over three years.

The Victorian Government was estimated to have lost some $260,000.