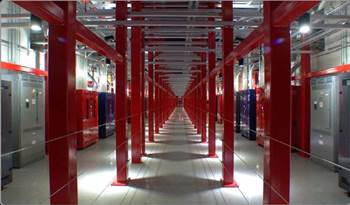 Kicks off US operations.

Web host VentraIP will begin operating in the United States this month after taking space in the futuristic Switch SuperNap NV-7 data centre in Las Vegas.

Chief executive officer Cheyne Jonstone told iTnews that the company would replicate its Australian environment in the US.

"It's literally exactly the same because it's joining our existing AS number, so it's basically an extension of our Australia network," he said.

Jonstone said the company would send over one of its engineers "towards the end of this month to go through everything and double check that [it's] to our usual standard".

The futuristic SuperNap facility was recommended to Jonstone by NextDC founder Bevan Slattery.

Although Jonstone also inspected facilities in Texas, California and New York, he ended up going with SuperNap, calling it "the most impressive data centre concept I have ever stepped foot in".

"The innovation that has gone into that building is extraordinary," he said. "I've never seen anything like it."

VentraIP will begin serving new clients from its US infrastructure from November 19.

It's the first time that VentraIP services have been available to customers outside of Australia and New Zealand.

Jonstone said the US operations "will accept clients from all over the world".

"We're going to take it easy for the first few months," he told iTnews.

"We're not going to go all guns blazing. We want to make sure that every things running absolutely perfectly before we do anything like that."

Jonstone said VentraIP's US go-to-market strategy would be similar to that used in Australia.

"We're going to pretty much do what we did here - trying to get the tranche of customers by using heavy discounts," he said.

"Then, we'll also try and find a couple of smaller providers over there to acquire."

VentraIP has appointed Branden Colton to head up its US operations.

Jonstone also flagged plans to expand into Asia for the first time, naming Singapore or Hong Kong as potential locations for a point-of-presence.

"We are in discussions with data centre providers in both locations and we'll see how it goes before we look at making a decision," Jonstone said.

If all goes to plan, VentraIP will bring Asian operations online in the second quarter of next year.