VoiPing the floor with carrier revenue.

Growth in international voice call revenue rests almost entirely with OTT (over the top) messaging applications at the expense of traditional telcos, according to new market research.

Telegeography counted 490 billion minutes of international phone calls last year, up five percent from 2011. That same stat had grown at closer to 13 percent on average over the last two decades.

The number of estimated international Skype-to-Skype voice and video calls increased by a huge 44 percent to 167 billion minutes in 2012, Telegeography said. 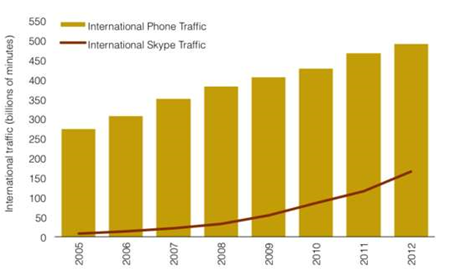 As users move to applications such as Skype, Google Voice, Facebook Messenger, Viber and others for international calling, telcos will face declining revenues from their PSTNs for the coming years, the analyst group noted.

Analyst group Ovum predicted in September 2012 that the "international call revenue cash cow will come to an end" as people move to messaging applications.